How can hair loss at the temples be treated hair loss or hair thinning in the areas of the temples?  Is a common concern for a lot of people who come in to see us I’ll discuss the typical causes.

For hair loss in the temples and how we help our patients in our practice I’m Dr Amiya Prasad I’m  a Diplomate of the American Board of Cosmetic Surgery and a Fellowship-trained oculofacial  plastic and reconstructive surgeon I’ve been in practice in New York City and long island for  over 25 years.

I’m the founder of TrichoStem hair regeneration centers this is a non-surgical system  for treating hair loss which I created based on regenerative technology I originally used to  help improve healing after hair transplant surgery TrichoStem Hair Regeneration has been so effective that we’ve been treating hundreds of men and women every year since 2011 from around the world.

We actually built a freestanding center for non-surgical hair loss treatment in Vienna, Virginia so temporal recession in men and women is often caused by genetic pattern hair loss. A lot of my male pattern hair loss patients will express significant concern about seeing their temples receding some men will also notice that an area called the temporal point.

Is also appears to be thinning oftentimes temporal recession does not occur in isolation but with hair loss affecting the crown area and the frontal hairline some men have more diffused thinning which affects the temples hairlines crown and mid scalp simultaneously.

This diffused type of pattern is also characteristic of female pattern hair loss a lot of women will notice these changes occurring as estrogen levels decrease with menopause we see a lot of women with temporal hair loss related to wearing tight ponytails and hair braiding.

So what can we do to help people with temporal hair loss in our practice based on your diagnosis we customize treatment plans to maximize hair growth and scalp coverage. Genetic male and female pattern hair loss are both categorized under the term androgenetic.

Alopecia androgenetic alopecia is diagnosed based on the presence of hair miniaturization where the diameter of the individual hair strands decreases and decreasing density as hair follicles remain in a prolonged resting phase as well as permanently disappearing as I mentioned earlier with TrichoStem Hair Regeneration.

We help people with hair loss by reactivating hair that’s in a prolonged resting phase and thickening hair that is thinning typically our patients will have about two sessions  approximately 18 months apart which we’ve seen as the optimal strategy for maximal coverage.

We generally see benefits sustained for three to five years and in many cases even longer as  far as helping people with traction alopecia I’ve observed that many people who would have appeared to have significant permanent hair loss will actually see regrowth after TrichoStem Hair Regeneration treatment this regrowth does vary based on the number of viable hairs remaining.

Practically speaking the only way to determine this is to treat and observe the results we often  see a lot of patients with traction alopecia who also have female pattern hair loss so  treatment can make a significant difference for them overall so in summary temporal hair thinning can be an early sign of genetic pattern hair loss or androgenetic.

Alopecia hair loss in the temples and below can be caused by traction alopecia management of hair loss can be a combination of regenerative therapy like TrichoStem Hair Regeneration  with medical therapies such as DHT blockers for men and estrogen supplementation for women.

I hope this information from my experience helped you. If you are interested in recommendations for your individual situation you may contact us through our websites or call our offices to schedule a consultation. Thank you.

Hair loss or hair thinning at the temples can be understandably stressful, as people who never considered pattern hair loss affecting them may suddenly notice this issue. This article will explain the possible causes of hair loss at the temples and how it can be treated. 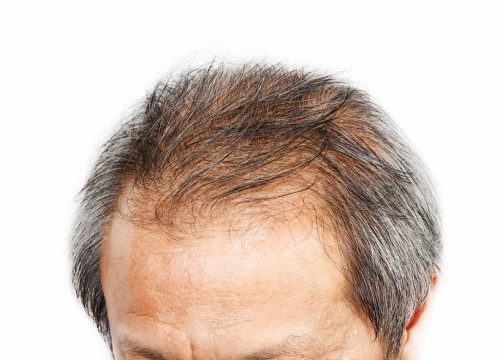 Temple hair thinning for men can be treated, ideally before progressive thinning gets worse. A major culprit of male pattern hair loss is the genetic predisposition of having scalp sensitivity to the form of testosterone called dihydrotestosterone, or DHT. Men with a scalp sensitivity to DHT experience progressive hair thinning. A prescription DHT-blocker like finasteride can slow progressive hair thinning, which works by inhibiting the enzyme 5-alpha reductase that is responsible for the conversion of testosterone into dihydrotestosterone. DHT-blockers like finasteride have a limited effect on actually thickening thinning hair, but this can be addressed by our TrichoStem Hair Regeneration treatment.

With only a single injection treatment session, we have thickened thinning hair of men experiencing pattern hair loss, especially in men who are too young for hair transplant surgery, or who would prefer a non-surgical hair transplant alternative. In fact, since hair transplant surgery is limited in number of potential donor hair for hair transplantation, and surgical hair transplants can only place a limited number of grafts per square centimeter of scalp before Some male patients with more advanced hair loss may get a second treatment which we call the booster, 15-24 months after the first, with results lasting 3-5 years. Male patients are still prescribed a DHT-blocker, particularly younger men with high DHT-sensitivity, as TrichoStem Hair Regeneration is not a DHT-blocker or a replacement for finasteride. Concurrent use of finasteride can maximize results, as well as the longevity of the injection treatment. 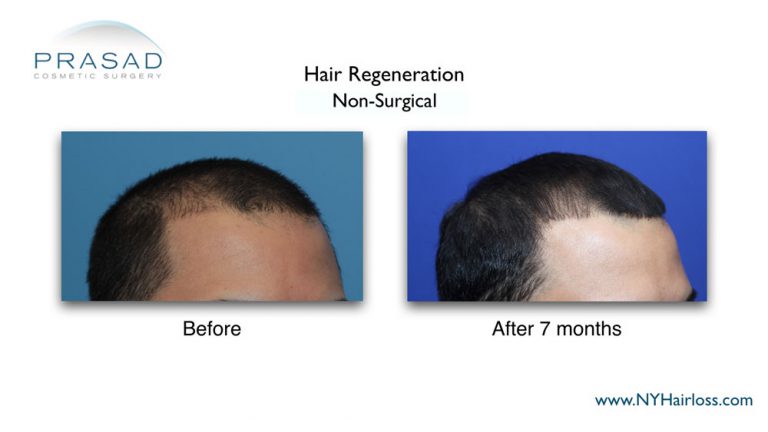 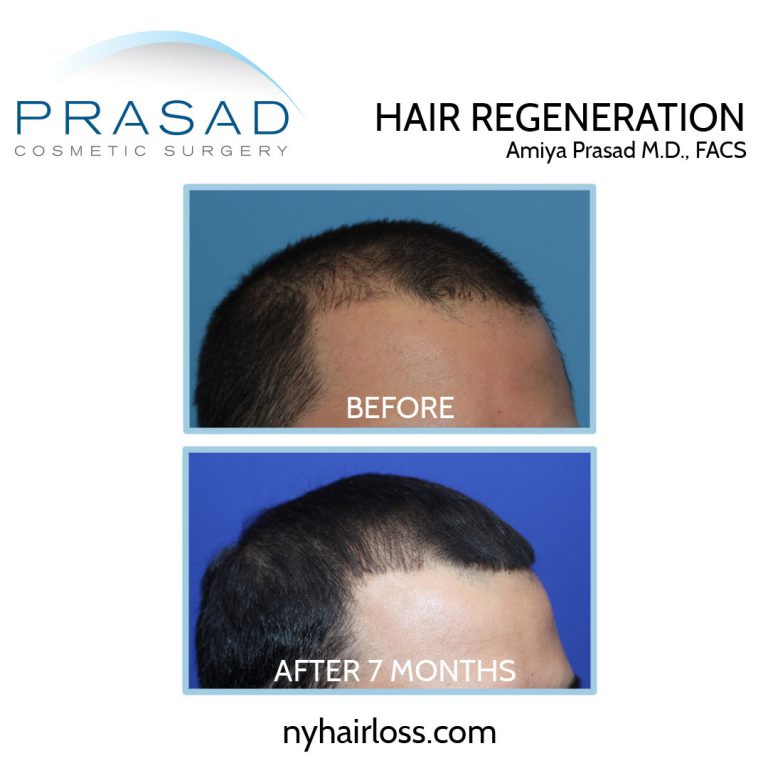 How to Fix Thinning Hair at Temples

The diffuse thinning of female pattern baldness can also be treated with the TrichoStem Hair Regeneration injection treatment. The treatment can increase density and thickness in the temple area, with most patients only requiring just one treatment session. The top of the scalp that is most affected by diffuse hair thinning can see a dramatic improvement in hair coverage by thickening thinning hair, and stimulating growth from hair follicles that are still viable, but currently not growing hair. Women, who have less pattern hair loss treatment options than men, can stop using minoxidil, as well as spironolactone after our injection treatment. Since DHT is not a significant factor in women with pattern hair loss like it is for men, Dr. Prasad generally don’t prescribe DHT-blockers like finasteride for women, even if they don’t have the injection treatment. 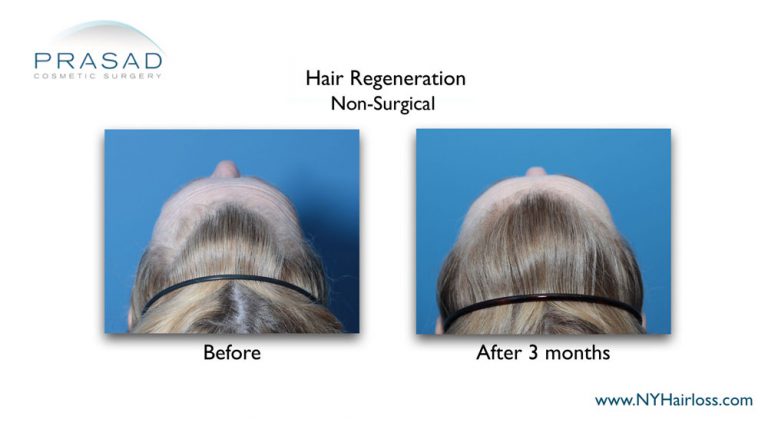 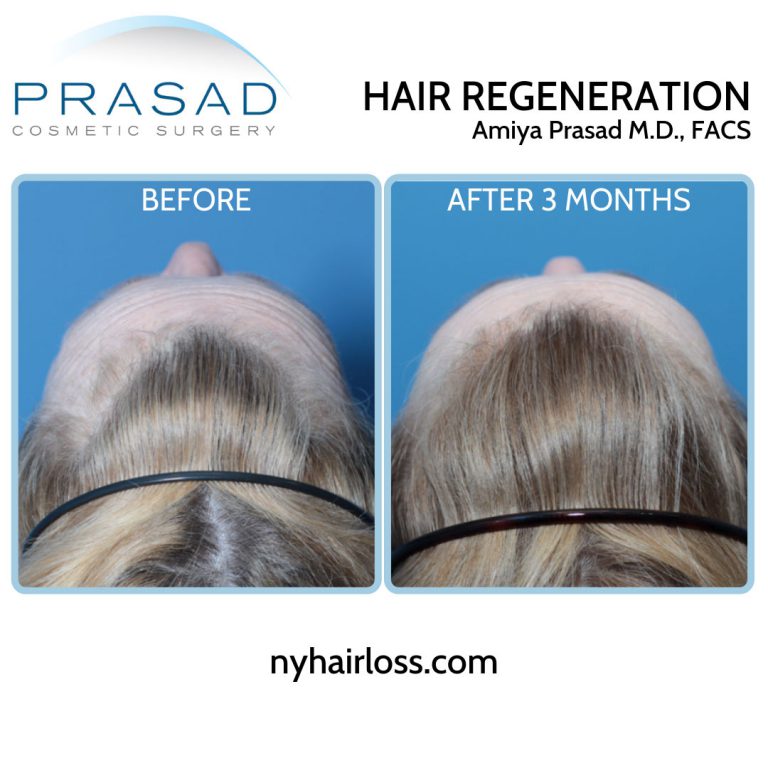 What Causes Thinning Hair at Temples on Women

Menopause-related temple recession, as well as scalp hair thinning can be treated with a similar approach to female pattern hair loss. The TrichoStem Hair Regeneration treatment is effective with treating thinning hair in menopausal women, by inducing thinning hair to shed, and renewing a healthier hair growth cycle so that thicker hair can grow in its place. The healthier hair growth cycle also reinvigorates hair follicles that are still viable, but haven’t been growing hair, for more hair growth. While the TrichoStem Hair Regeneration treatment can renew a healthier hair growth cycle by triggering the body to produce its own adult stem cells, the treatment is not a hormone therapy, so it can’t be used to stimulate more estrogen production in the body. Women with menopause-related hair loss may gain additional benefit in hair growth with hormone replacement therapy, which is usually prescribed by their gynecologist. 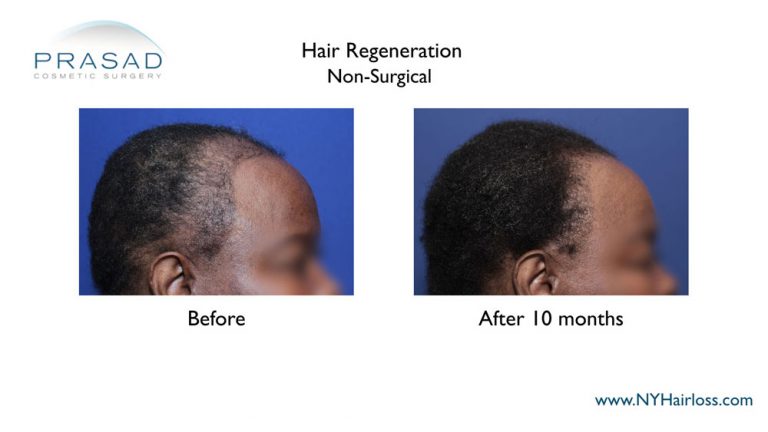 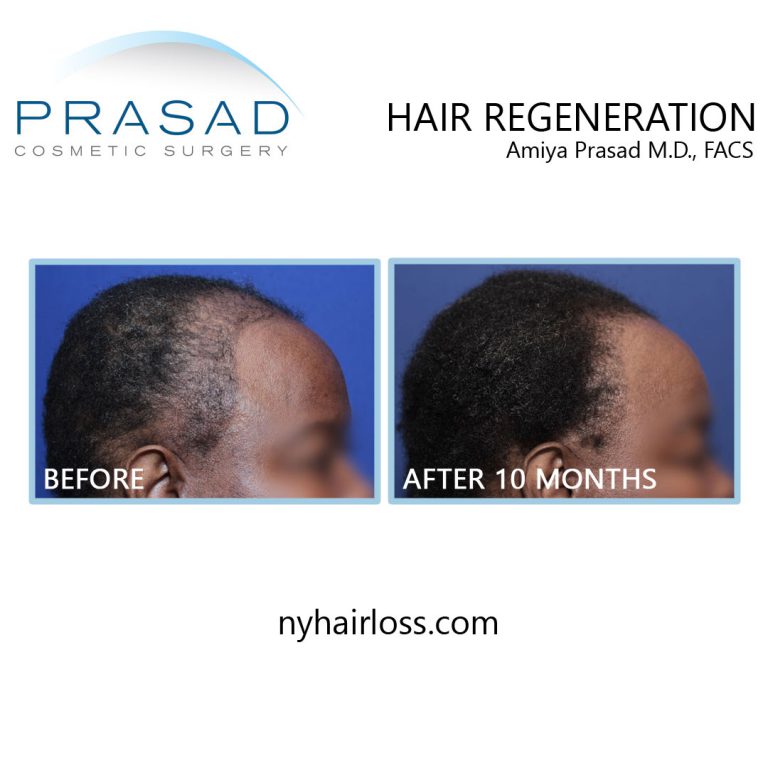 See hair restoration before and after portfolio

Temporal hair thinning can be the first sign of pattern hair loss, or part of pattern hair loss that is also affecting other parts of the scalp. We are at a time where thinning hair at the temples, as well as other parts of the scalp can be treated, unlike in the past where surgical hair transplantation was the only treatment for pattern hair loss. By addressing the causes of hair thinning with active management such as DHT-blockers for men, and treatments like TrichoStem Hair Regeneration for men and women, temporal hair loss can be managed effectively, hair density and thickness can be maximized, with more scalp coverage than has been possible in the past with surgical hair transplants. If you would like specific medical advice for your case, please fill up the form or contact any of our offices for a consultation. Skype and facetime virtual consultation is also available.