For more than 20 years,  Cosmetic Oculofacial Plastic Surgeon Dr Amiya Prasad has helped patients from around the world affected by ptosis, commonly referred to as “droopy eyelid” see and look better by performing ptosis surgery.

There are many different types of ptosis which can affect your vision and appearance. Dr. Prasad will perform a ptosis evaluation and recommend a treatment plan. Contact us for a consultation and learn more about the ptosis procedure below.

PTOSIS (pronounced “TOE-sis”) or a droopy eyelid, refers to a drooping of the upper eyelid of one (unilateral ptosis) or both eyes (bilateral ptosis). The droop may be barely noticeable, or the eyelid can descend over the entire pupil. It can affect both children (congenital ptosis) and adults (acquired ptosis). The most common ptosis cause is related to aging (involutional ptosis).

It is often seen that people with a droopy eye raise their eyebrows unconsciously (resulting in horizontal forehead lines). If the skin is relatively tight, some eyelid elevation can happen with eyebrow raising. Ptosis repair is not performed by most cosmetic and plastic surgeons as ptosis surgery is a highly specialized and delicate procedure. Ptosis correction surgery is only performed by oculofacial/oculoplastic surgeons who have training in both facial cosmetic surgery and ophthalmology like Dr. Amiya Prasad.

Ptosis which is present since birth is typically the result of a developmental defect in the levator muscle. Adult, or acquired ptosis, is usually associated with the thinning or detachment of the levator muscle tendon also called the “levator aponeurosis” .

A droopy eyelid can also be the result of trauma after significant eyelid swelling. It may also be caused can also by neurologic conditions such as myasthenia gravis, Horner’s Syndrome, and 3rd nerve or oculomotor nerve palsy. 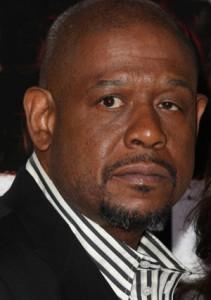 The degree of droopiness is individual. If you think you may have ptosis, compare a recent photo of your face with one from the past to see if your eyelid position has changed. As you get older, there’s a little bit more stretch and that compensatory action doesn’t work as well.

It’s very common for people who have a long history of ptosis to say it’s worse at the end of the day (heavy eyelids). Some people with ptosis are particularly bothered if the eye that is being affected is the dominant eye. 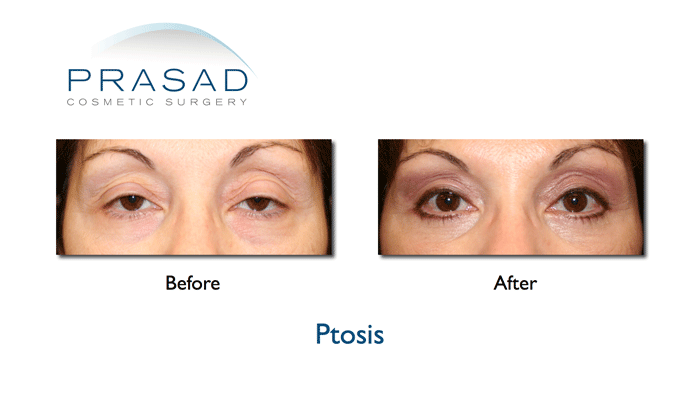 Congenital ptosis:  a term which means the droopy eyelid is present since birth due to the muscle responsible for lifting the eyelid (levator muscle) not developing fully. The levator muscle doesn’t contract completely nor does it fully relax. Congenital ptosis can get worse as a person gets older because of the natural structural changes of the face which occurs with aging. 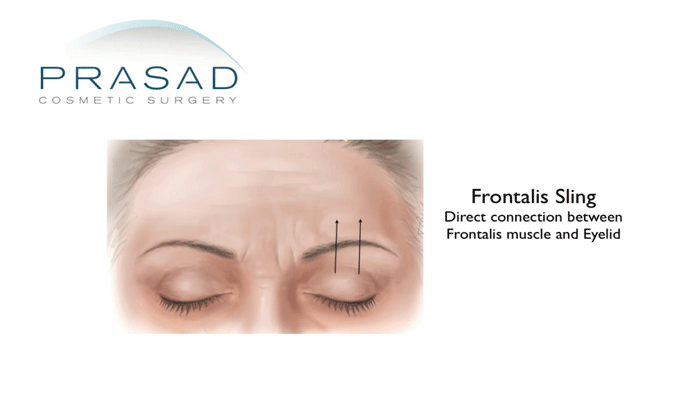 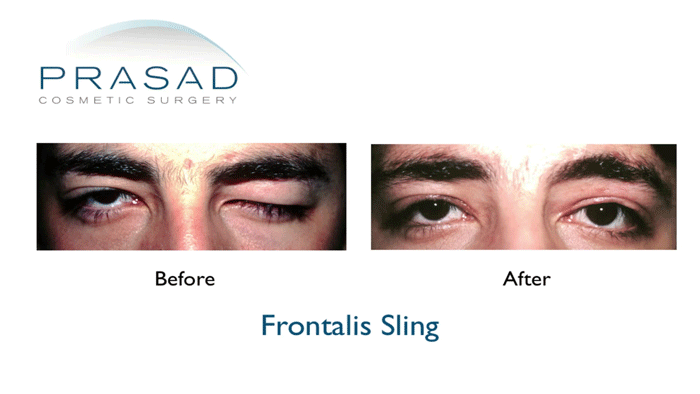 Acquired Ptosis: Refers to ptosis which is not congenital and can have several different causes. In adults, the most common type of ptosis is called involutional ptosis, which typically occurs slowly with aging.This condition is due to a stretching or thinning of the tendon of the levator muscle that lifts the eyelids called the levator aponeurosis.

Many people with this condition are frustrated by the strain of keeping their eyes open particularly as the day progresses. This type of ptosis can also occur after cataract surgery, LASIK, laser vision correction and other eye procedures. Acquired ptosis can also be related to neurologic conditions including stroke, myasthenia gravis, Horner’s syndrome, and 3rd nerve palsy.

Ptosis Caused by a Prosthetic Eye: Prosthetic eyes (artificial eyes) can cause stretch and thinning on the levator muscle (the muscle that lifts the eyelid). The physical weight, shape and lack of natural lubrication can contribute to the progression of ptosis. The ocularist can change the shape of the prosthesis to push the eyelid upward. 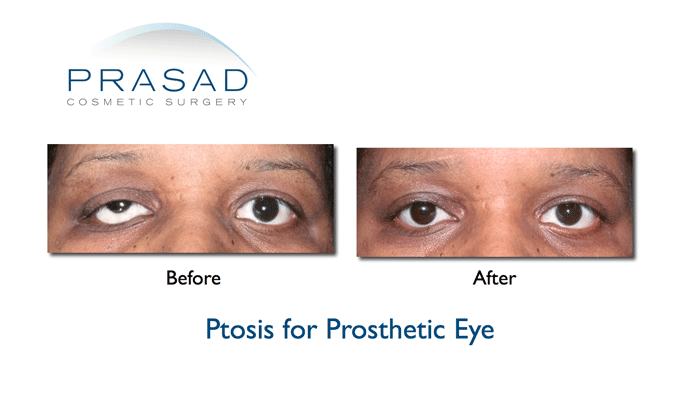 When dealing with congenital ptosis, if the child has no significant ptosis where it is affecting visual information before the age of 6, then a correction can be done at a later time when it’s more of an aesthetic decision. If the ptosis is affecting vision before the age of 6, ptosis surgery can be performed to insure better visual development. Consultation with a pediatric ophthalmologist is recommended to confirm the visual condition and ongoing management.

Ptosis in children is often from a poorly developed levator muscle that can not lift the eyelid. In such cases of congenital ptosis, children would need a frontalis sling procedure at a young age so that proper, unobstructed vision can also develop. Children can also find it easier to adapt to raising their eyelids with the frontalis (eyebrow) muscle at a younger age than those who have a frontalis sling procedure in their teens or as adults. 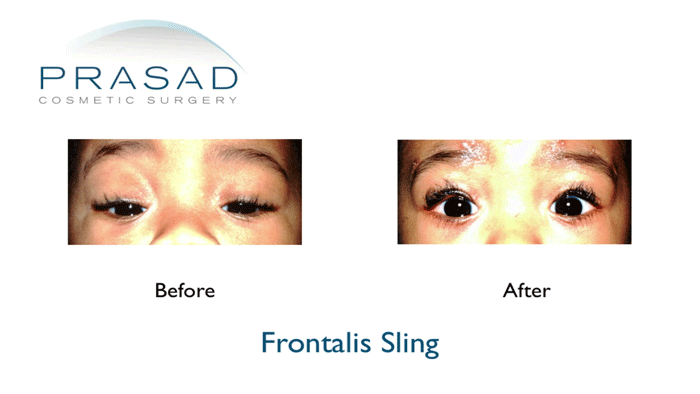 Choosing a Surgeon for Ptosis Repair

Ptosis surgery is a highly specialized procedure that can’t be performed by most cosmetic surgeons who perform other types of eyelid surgery such as blepharoplasty. Since the procedure involves working with the delicate levator muscle which raises and lowers the upper eyelid, choosing the right surgeon is very important. Oculoplastic surgeons or oculofacial plastic surgeons are specially trained in delicate procedures for the eye including surgery (ophthalmology) and specialized training in plastic surgery of the eyes (ophthalmic plastic and reconstructive surgery).

See ptosis before and after photos 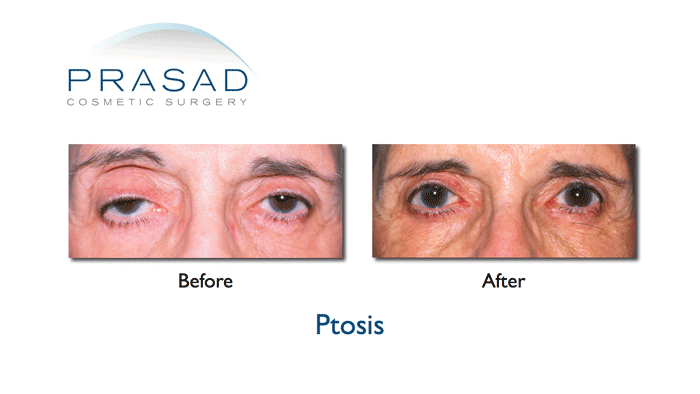 Candidate for the Ptosis repair

Ptosis surgery may be necessary when the droopy eyelid has caused the upper eyelid to partially or completely block the vision. In children, aggressive management is often required in order to allow the vision to develop normally.

For the people concerned with asymmetry, it is important to note that it is not only limited to the soft tissue of the eyelids such as the skin and levator muscle, but sometimes related to the natural underlying bone structure. The human face is not perfectly asymmetric. If someone looks at their face long enough, they can notice the subtle asymmetry of the two sides.

How is ptosis surgery performed?

In adult patient with ptosis, Dr. Prasad would perform levator advancement surgery where the muscle is moved forward without sacrificing any of it (in contrast to “levator muscle resection”). The procedure is performed with the goal of positioning the eyelid to the appropropriate level.

During surgery, in order to achieve the desired height, symmetry and cosmetic appearance, Dr. Prasad has his patients open and close their eyes. Typically, he will sit the patient up during the surgery and have them open and close their eyes so that the muscle and the position of the eyelid is observed with gravity and may be adjusted. The patient is comfortable while the muscle is being adjusted.

The procedure is typically performed under local anesthesia with intravenous (IV) sedation. The surgery can take anywhere from one to two hours.

How to Prepare for Ptosis Surgery

In order to prepare for ptosis surgery, it’s important to minimize the risks for complications during surgery such as bleeding and infection. Avoiding blood thinners such as aspirin, NSAIDS (such as ibuprofen), Vitamin E, and Ginkoba. Make sure you review all your medications including vitamins and supplements with Dr. Prasad before your procedure.

If you have any chronic eye problems such as dry eye or allergic conjunctivitis, its very important you manage these conditions with eye drops and other medications as necessary prior to surgery. Discuss any eye conditions you have with Dr. Prasad prior to surgery. As with any surgery, a full review of your medical history, current medications and risks associated with any systemic disease will be discussed with Dr. Prasad. 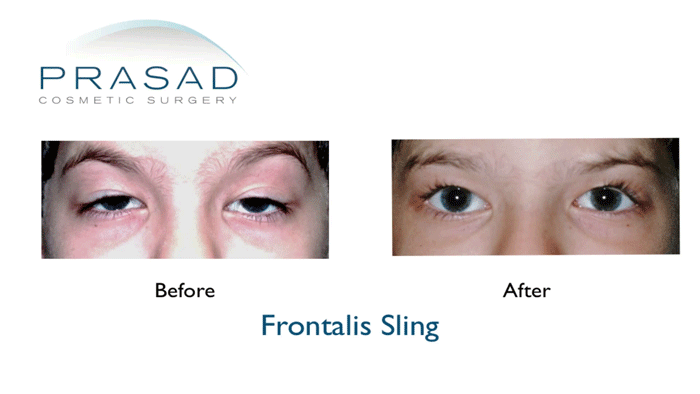 Side effects are limited generally to swelling and bruising around the eye and cheek area. Dry eye can also occur temporarily after any eyelid procedure, but since ptosis surgery results in more exposure of the eye, its recommended to have artificial tears to keep the eyes lubricated after surgery.

Post-surgical instructions are provided for the specific type of ptosis surgery you undergo. General instructions include: the application of antibiotic ointment, cold compresses and other details.

Follow up appointment after surgery will be scheduled with you. Typically patients are seen after 1 week for suture removal for procedures such as levator advancement. In other types of ptosis surgery, you may need to be seen earlier.

After the surgery, it’s routine to remove sutures after 1 week. For most people who undergo ptosis surgery, the recovery period to return to work is about 1 week. Some bruising may be present for about 2 weeks.

Swelling of the eyelid can be present for up to a year, but the majority of patients find that within a few weeks of surgery, they’re appearance is acceptable and does not draw any attention. If you want to correct your ptosis before an important event like a wedding, the more time you allow for healing, the happier you will be with the final result.

Risks related to the ptosis surgery include under correction (eyelid too low), over correction (eyelid too high), eye exposure, scarring, infection, bleeding, excessive scarring and undesirable cosmetic result. Ptosis surgery is performed in ways to minimize these risks. If the eyelid shape, height or symmetry requires enhancement, additional surgery is indicated. Dr. Prasad is committed to helping his patients achieve the results which are most satisfactory and has a well established record of successful surgical outcomes.

Can I fix ptosis without surgery?

While some people recommend alternatives solution to fix a droopy eye, by getting enough sleep, using injectable such as Botox or Restylane, and eye exercises with a patch to strengthen the levator muscle; none of those options will help correct the ptosis as well as surgery.

Blepharoptosis is another term for ptosis surgery, whereas blepharoplasty is a term to describe eye lift surgery – the cosmetic procedure for the upper or lower eyelid to improve the appearance around the eye for excess upper eyelid skin or puffy eye bags.

Will My Eyesight Change after Ptosis Surgery?

For most people, the eyesight has some improvement since the droopy eyelid can block part of or all of the pupil. Ptosis can cause a mild astigmatism, so after surgery, the cornea shape can change slightly requiring a change in eyeglass or contact lens prescription.

The cost of the droopy eyelid surgery is dependent on the type of procedure as well as the anesthesia and facility costs. Dr. Prasad’s offices have Joint Commission accredited operating facilities in Manhattan, New York City and Garden City, Long Island. Fees are determined after Dr. Prasad performs your examination. Dr. Prasad’s practice does not participate in any insurance plans. 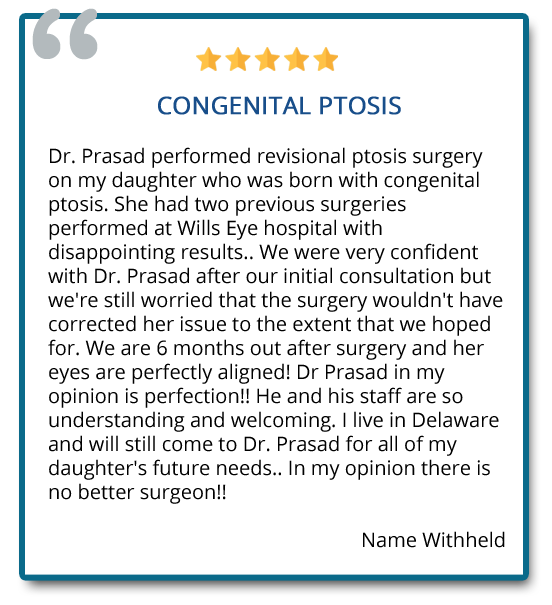 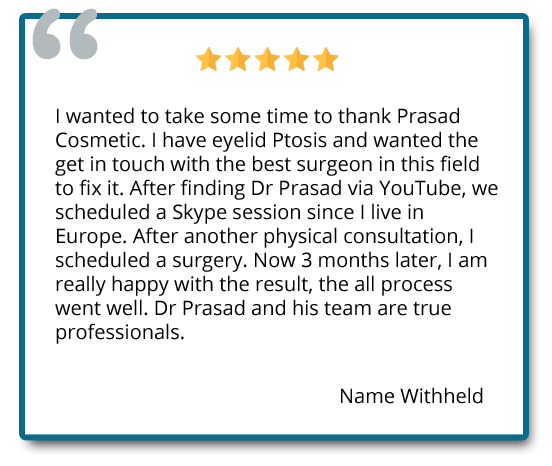 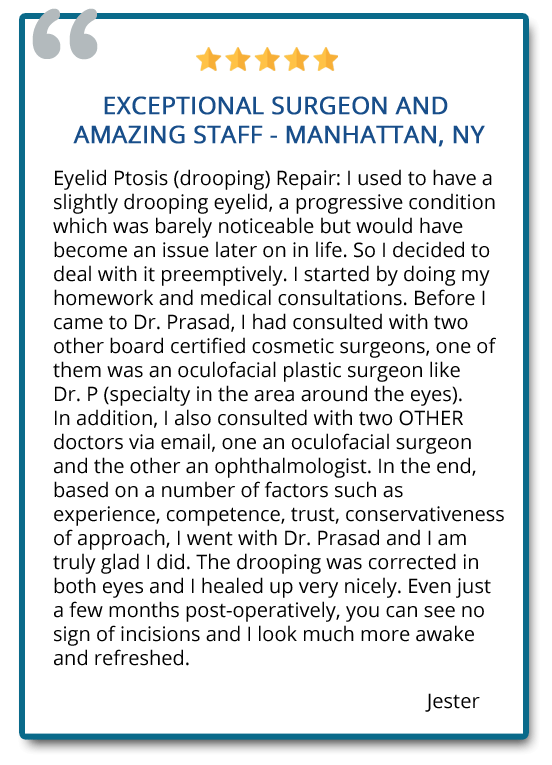 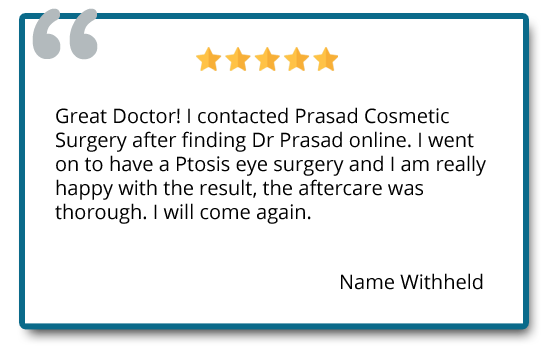 Oculoplastic surgeon Dr. Amiya Prasad is an expert in cosmetic and reconstructive eyelid surgery. Schedule your consultation with Dr. Prasad for your eyelid ptosis surgery today! Contact Dr. Prasad at his New York office at (212) 265-8877 or in his Garden City office at (516) 742-4636, or fill out the contact form below.

American Board of Cosmetic Surgery