How to Minimize Hair Transplant Scars?

I performed surgical hair transplants throughout my career, with most of my experience being with FUT or follicular unit transplantation, also known as “strip surgery”. The “strip” refers to the strip of hair-bearing skin that is excised from the donor area, or permanent zone of hair to harvest hair grafts.

As a cosmetic surgeon who routinely performs facial procedures such as facelifts, and brow lifts, I focused on how to attain a well-healed, minimally perceptible scar. One of the tools I used in this effort is the extracellular matrix by ACell, which is a material that enhances wound healing through the activation of your adult stem cells. I routinely used this material to optimize healing for facelift incisions as well as for reconstructive procedures. This strategy worked out very well, as I found the strip incisions to heal faster with overall better long-term results. I also used the same material to enhance the healing of the hair grafts. 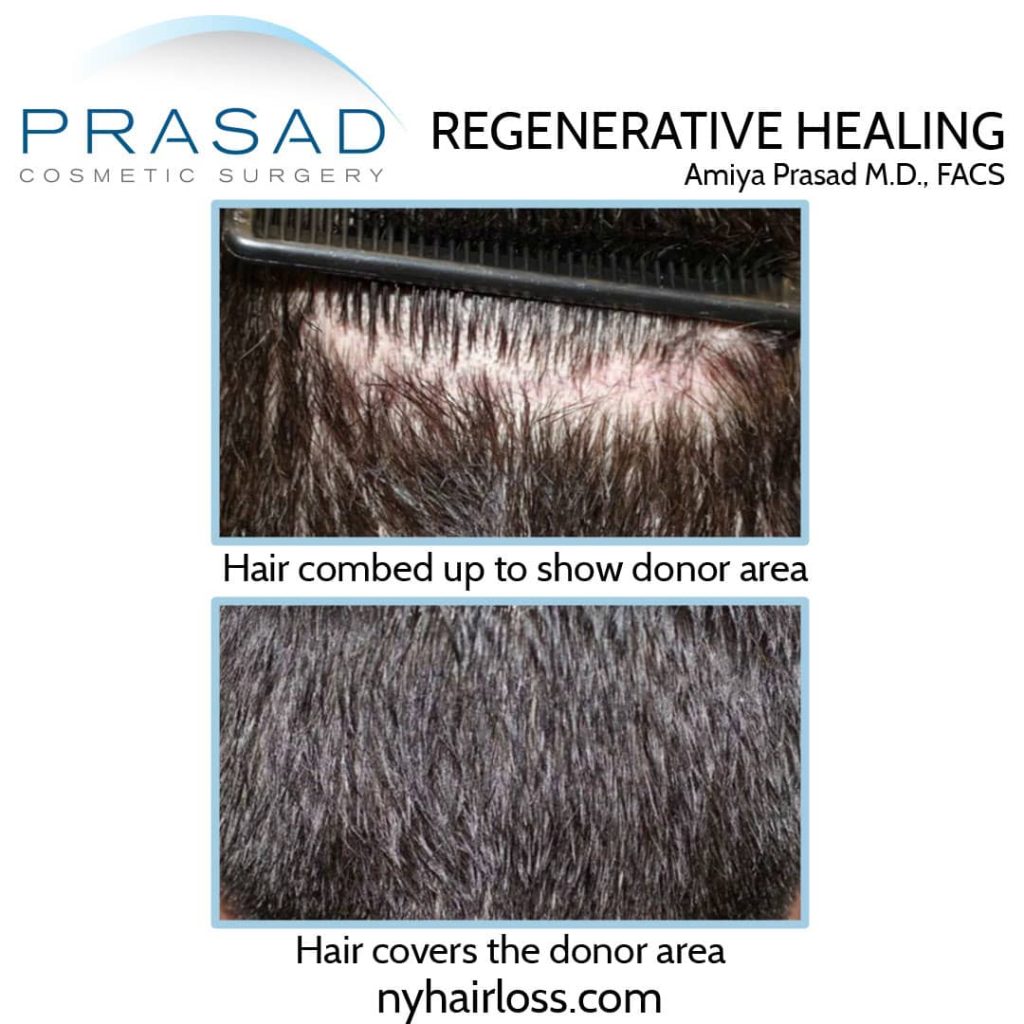 A major frustration with hair transplant surgery is that the percentage of hair grafts that will not survive range from 10% to as high as over 90%. I found that with Acellular matrix, the hair grafts healed much better, and the survival rate of the grafts went up considerably. I also noticed that after one year, the thinning hair located outside of the transplanted area increased in number and became thicker. This was my inspiration for developing a system of treating thinning hair without surgery.

What is FUE Hair Transplant Surgery?

Around the same time, the popularity of strip surgery was being overtaken by a different approach called follicular unit extraction (FUE). FUEs rose in popularity essentially because of the frustration felt by people who had FUT surgery with what was referred to as “ugly strip scars”. In my opinion, the so-called “ugly strip scars” was the result of an aggressive single procedure, or multiple strip harvesting procedures that created significant skin shortage and tension resulting in suboptimal healing. 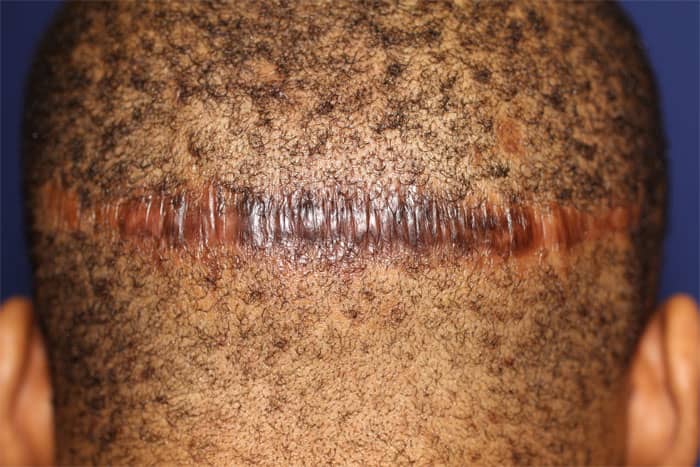 I would also assert that many people who were being operated on are not good candidates for hair transplant surgery, which results in poor healing of the donor area incision. In many instances, if the patient has straight or wavy hair, these scars could be hidden. During this time it became a popular trend, particularly for younger people to wear their hair very short making the strip scar less desirable. This resulted in a growing demand for FUE surgery, which was being marketed as “scar-less surgery”. The term “scar-less” surgery is inaccurate. The grafts are harvested in a much larger area than FUT surgery with small round skin punches. There needs to be a minimal distance between these punches, which results in a wide area of hair-bearing skin to be harvested from. This area is way outside of the true permanent hair zone. 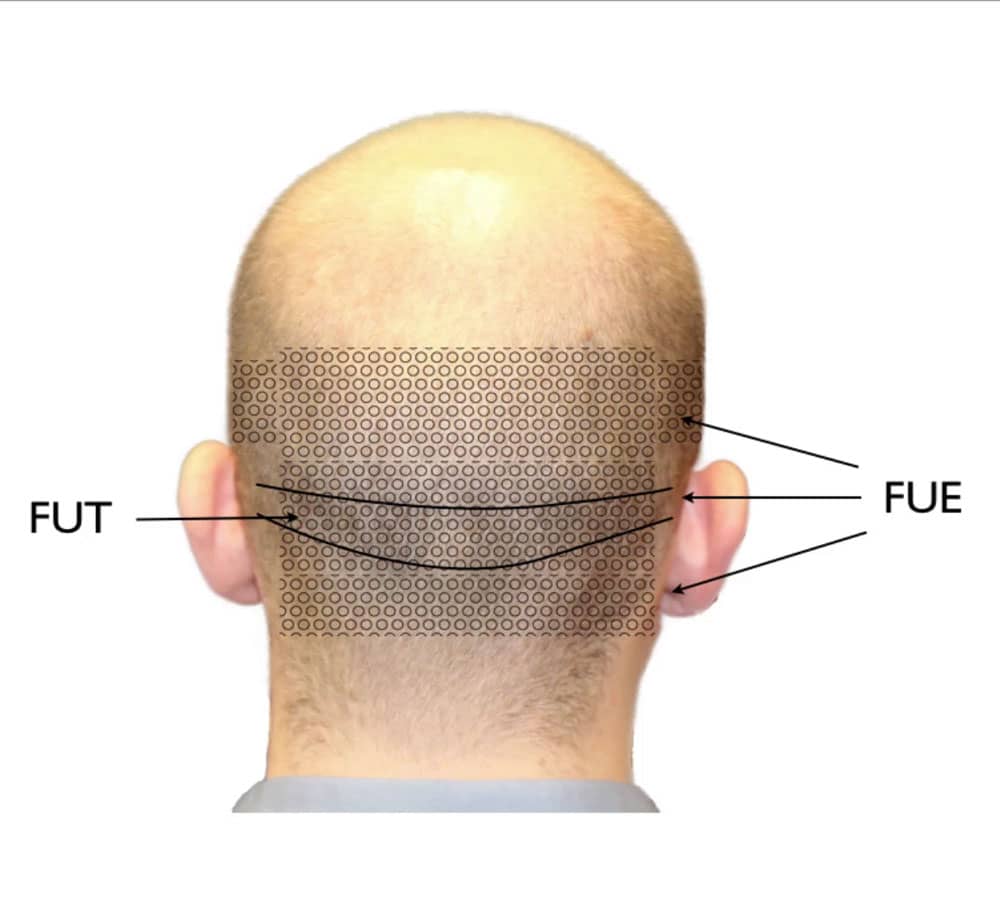 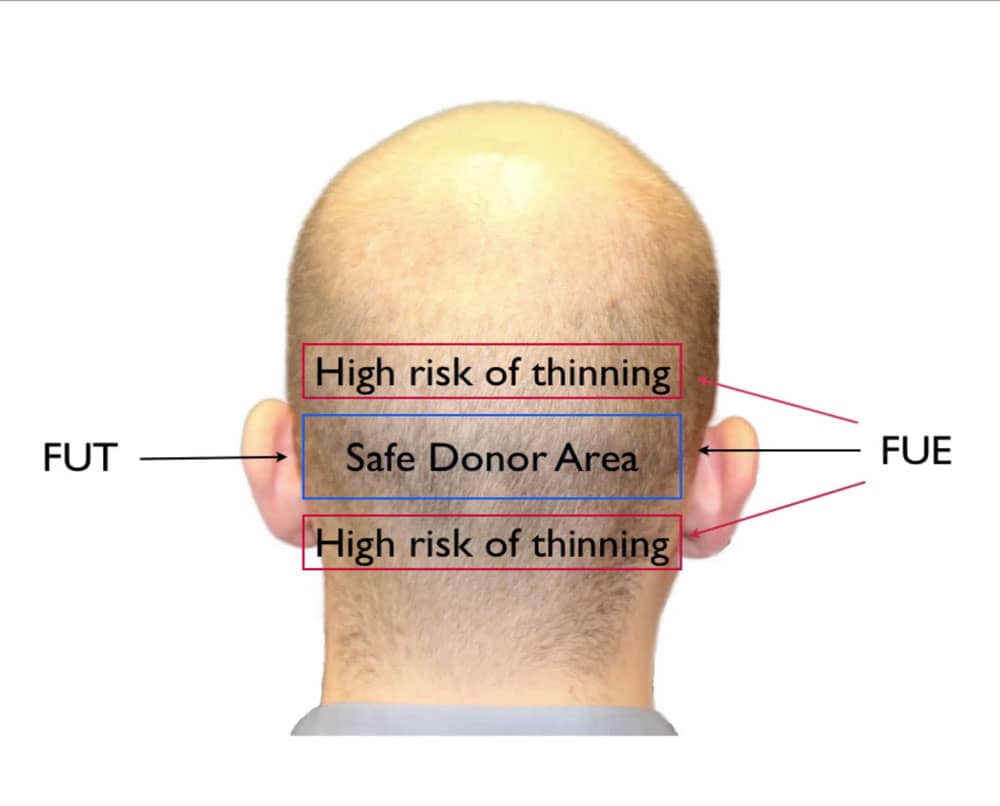 Further, the claim of scar-less surgery is far from accurate. In reality, there’s considerably more scar tissue in comparison to a FUT or strip surgery. The more significant issue is the survival rate of hair grafts. In FUE surgery, it is generally understood that about 30% of grafts are transected, which means there is no root when the hair graft is placed. In addition, due to the limited amount of tissue in each graft, the graft survival rate is lower in comparison to FUT procedure or strip surgery. 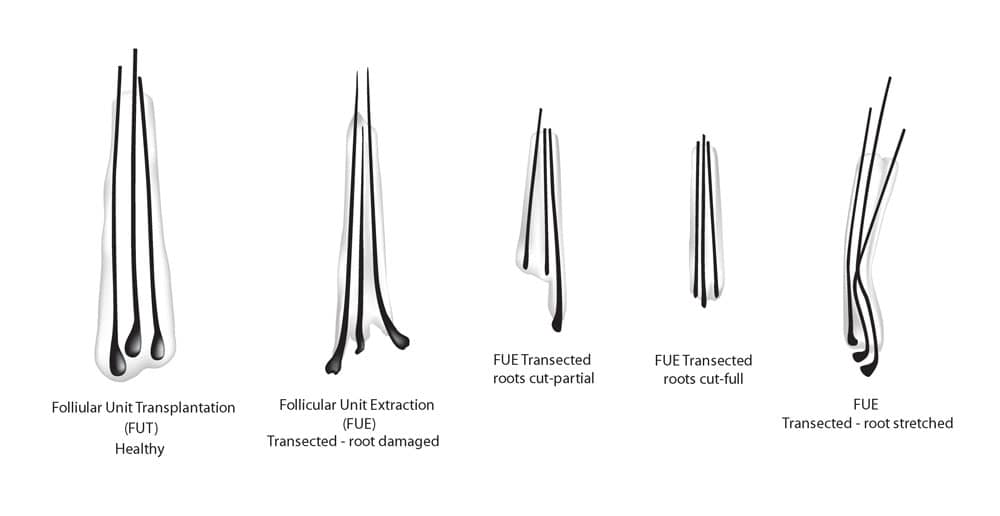 What is the Best Hair Transplant Alternative?

As mentioned earlier, I developed TrichoStem® Hair Regeneration because I recognized that there is a potential to get results that could be better than surgical hair transplant. How could that be possible? Since most people coming in for consultation had thinning hair, I recognized that the density of their existing hair was much better than the density that would be made with a hair transplant. Native hairs exist naturally more close to each other than a hair transplant can safely achieve. The density of your native hair even when thinning can be 50-100 hairs per square centimeter, while a transplant is typically about 20 grafts per square centimeter. This means that reactivating hair that is not growing and thickening your thinning hair can result in better coverage than hair transplant surgery. 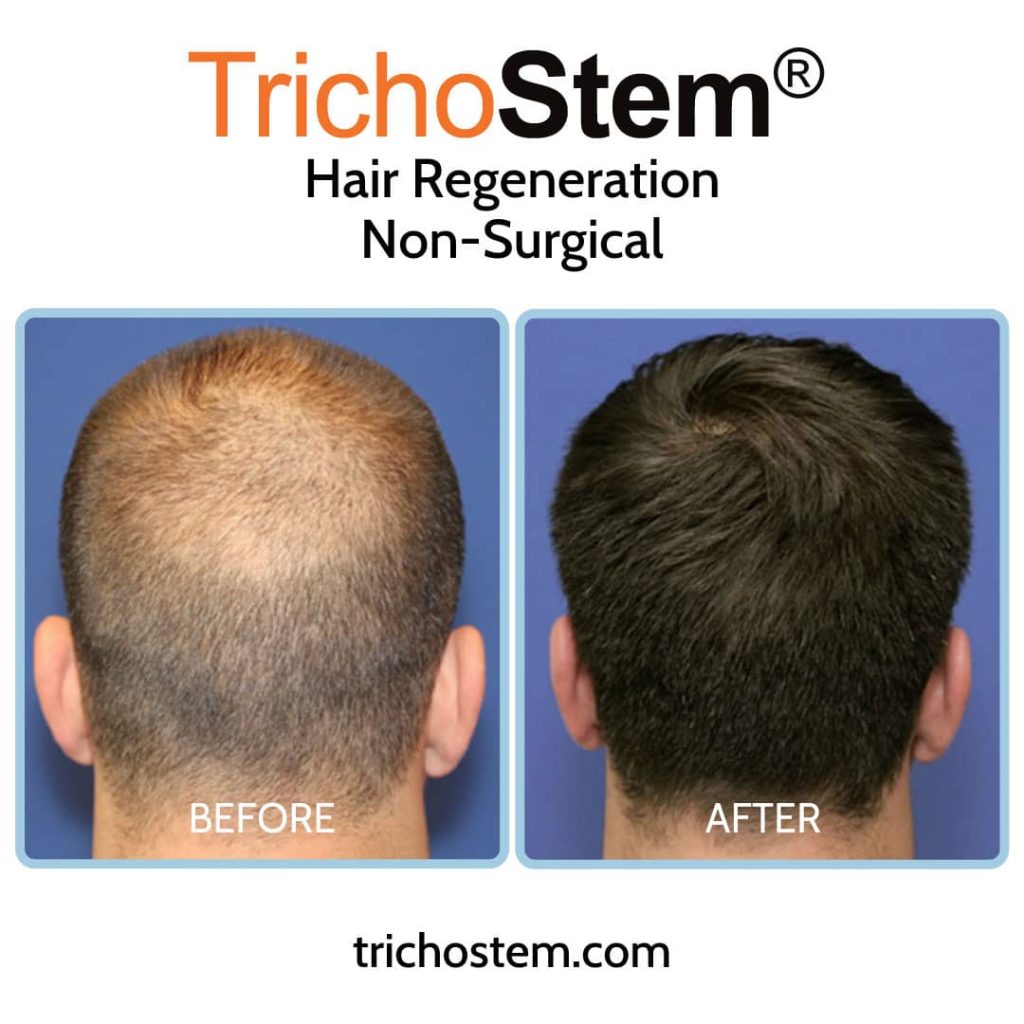 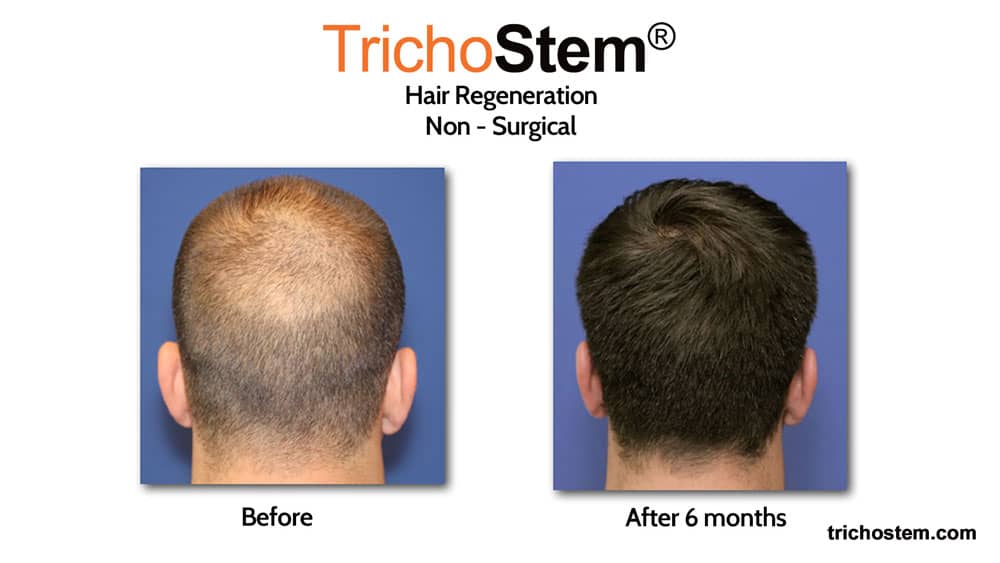 I worked every day on dosing and delivery methods for optimal results using Acellular matrix, and PRP (platelet-rich plasma). I followed my patients closely with high-resolution digital photography and microscopy every three to six months for years. It became clear that my hypothesis was right – contrary to the assumptions of hair transplant surgeons for whom the first line for hair thinning is surgery, TrichoStem® Hair Regeneration provided more effective scalp coverage than even 2 hair transplant surgeries, in the right patient. The success of this system of hair loss inspired me to build a freestanding center in Northern Virginia, to help make our system accessible to more people. 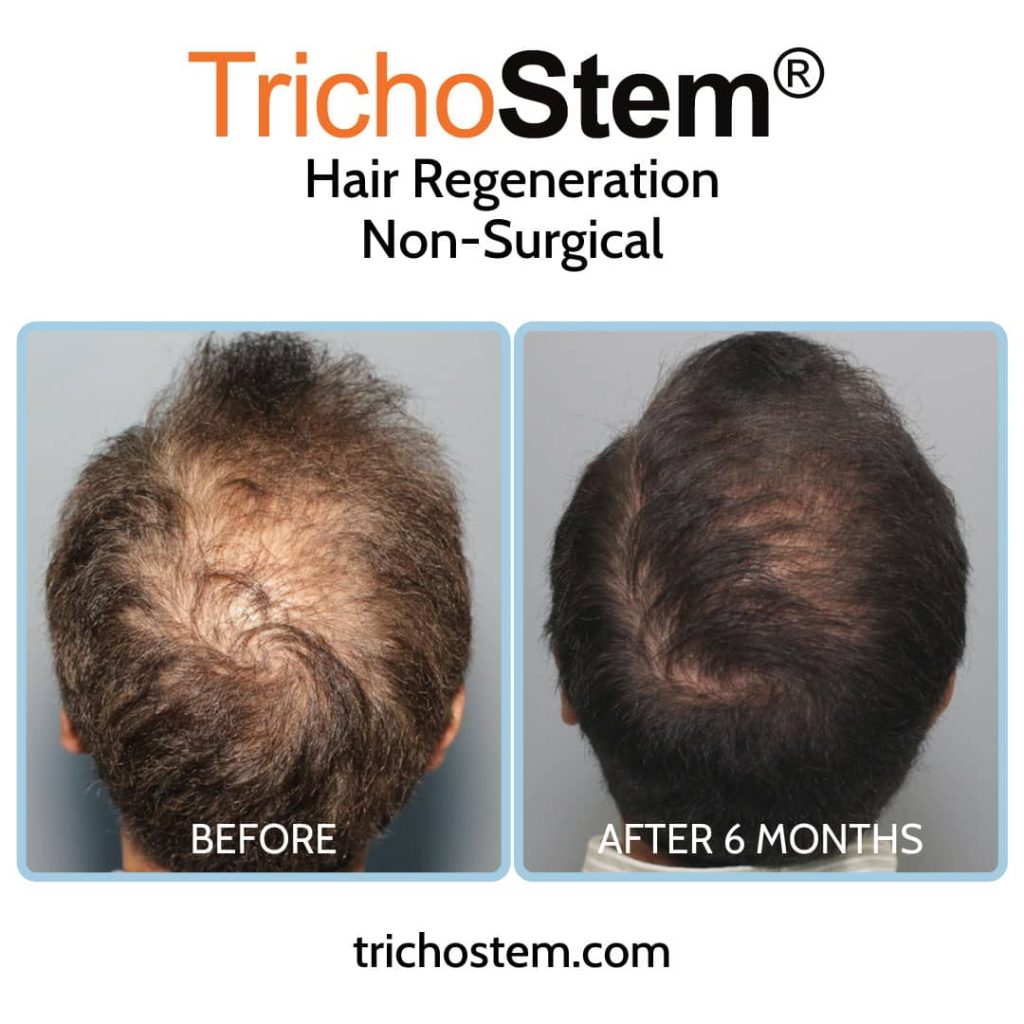 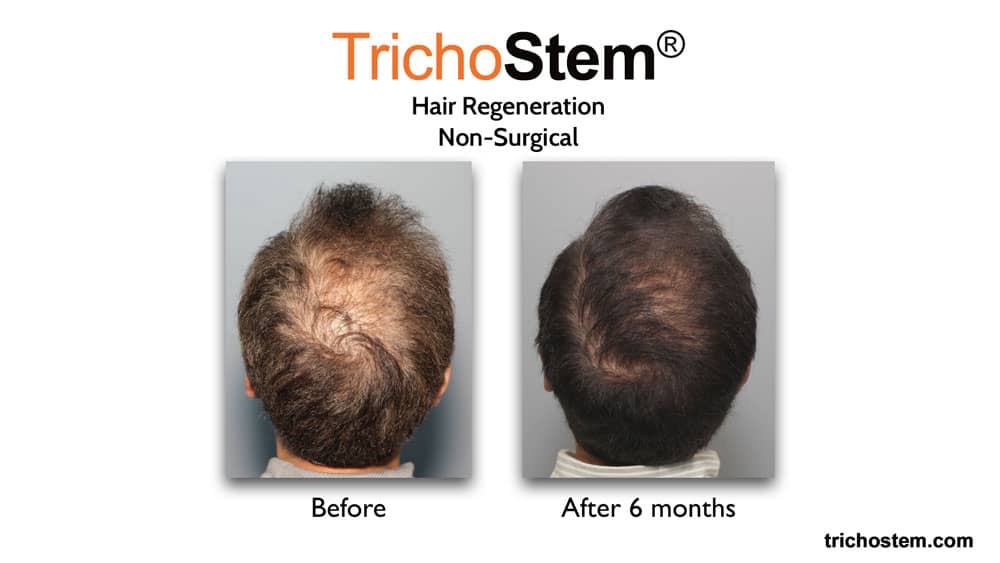 One relevant variable, particularly for people with good density is that during hair transplant, much of the existing thin hairs are permanently lost because of direct trauma during surgery as well as vascular compromise and inflammation. This is so-called the “collateral loss” with the rationale being that the thin native hairs were going to go away eventually and thicker hair was being transplanted. 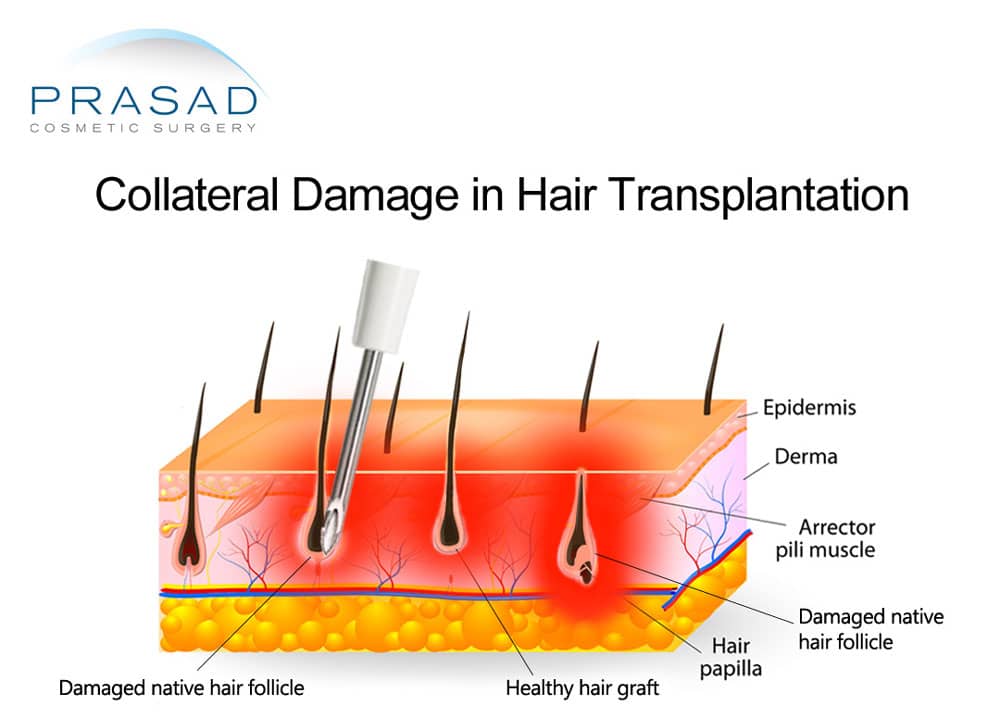 When someone has already lost a lot of hair, and they are losing their hair at a fast rate, hair transplant surgery cannot keep up with this degree of loss. Each transplant surgery after the first typically has less hair to harvest for grafts. More surgery also means more scars. I regularly see people who have had several hair transplants over 5 to 10 years, and still they don’t appear to have much hair. 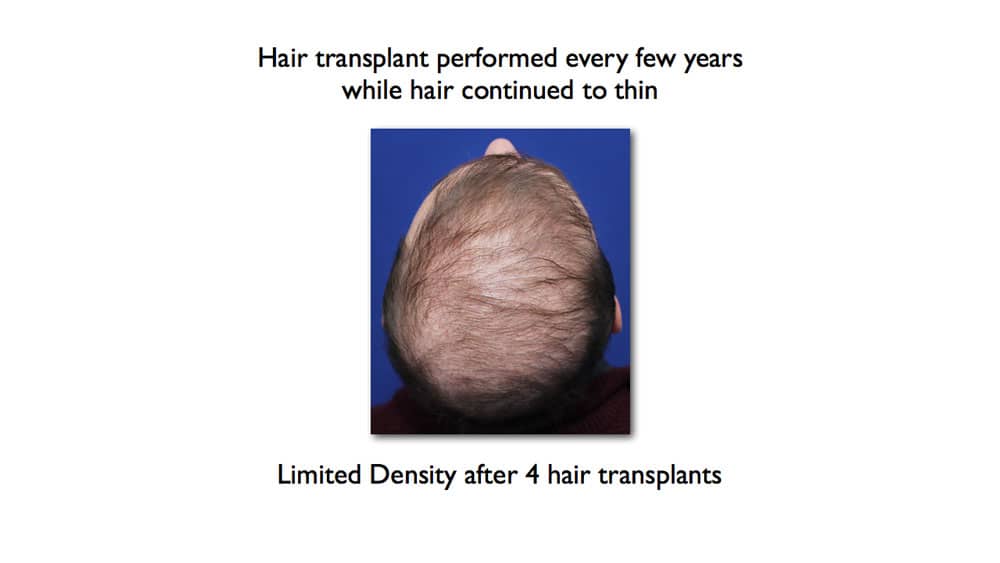 Now, with TrichoStem® Hair Regeneration, this approach of performing multiple surgeries to keep up with progressive hair loss is no longer the first line of therapy for thinning hair. I feel that the only indication for a hair transplant is to place hair in an area toward the front where the skin is smooth bald for many years.

For everyone else, since 2011, TrichoStem® Hair Regeneration has been the optimal system for men and women with thinning hair in my practice. There are of course limitations, as genetic pattern hair loss is not cured, but it can be managed. Medical therapy such as DHT blockers and hormonal replacement can potentially optimize the longevity of hair growth. Hair loss is still going to progress, but the option to improve your scalp coverage with one to two treatments performed over 2 years with the longevity of benefit is typically 3 to 5 years and in many situations even longer is far more accessible, convenient, less risky, and more economical than surgical hair transplantation. 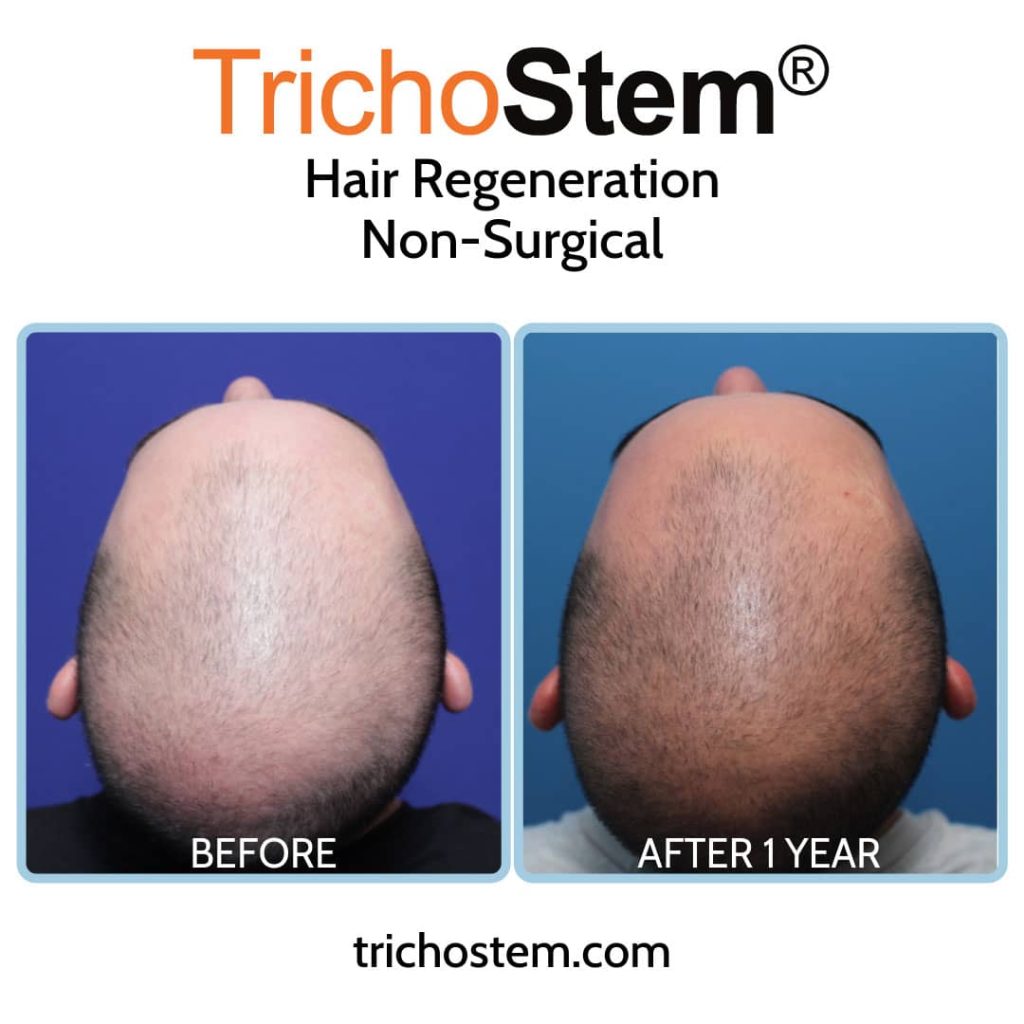 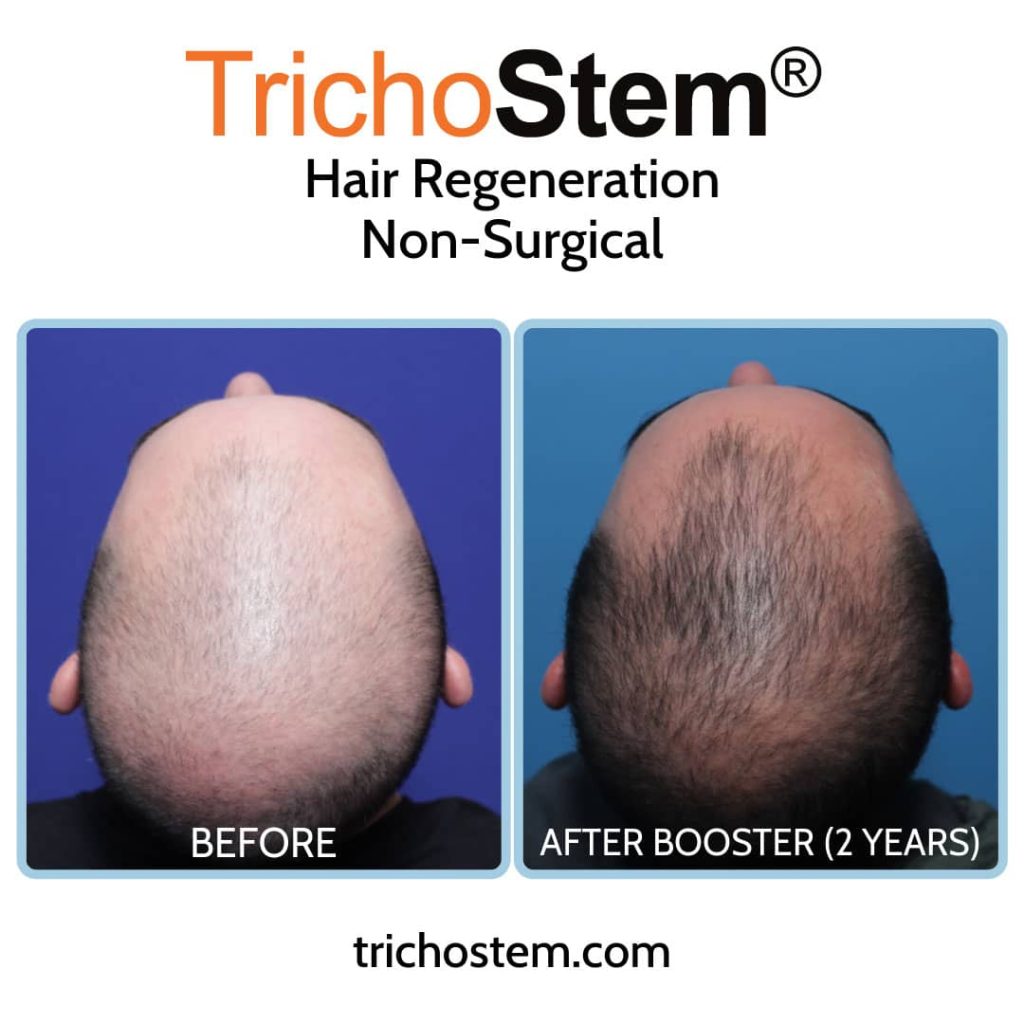 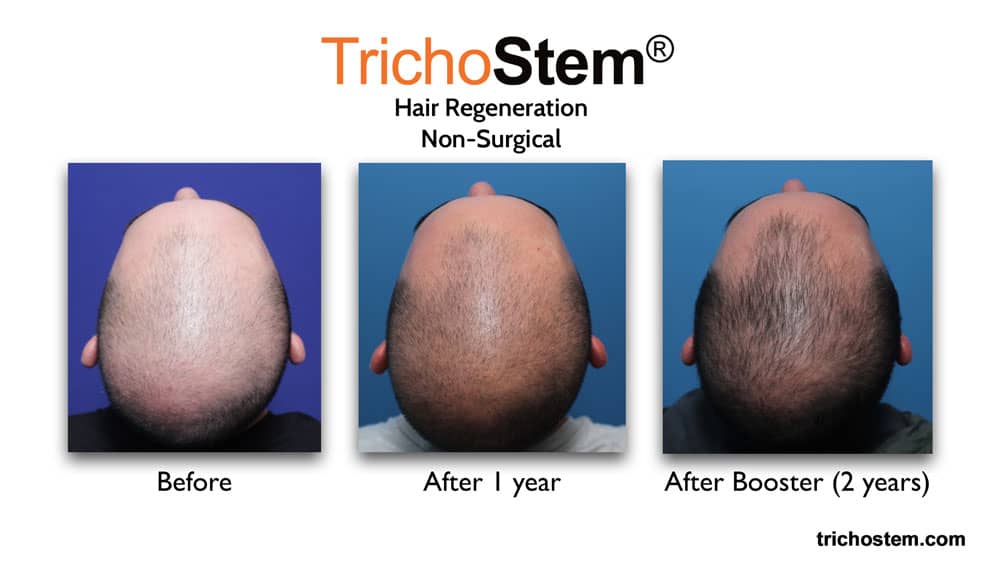 Since 2011, I have observed the hair loss profiles of a wide range of patients who came from around the world, so I developed a classification system for hair loss for men and women. This classification is used to create customized treatment plans based on gender, age, age of onset of hair loss, rate of progression, degree of hair loss, and other medical variables. I find that during the consultation, I generally suggest hair transplant to be considered as a last option, after achieving the full results of the TrichoStem® Hair Regeneration treatment. Over 99% of my patients don’t pursue hair transplant after TrichoStem® Hair Regeneration. I’ve observed that most people look for a hair loss solution after they’ve passed a certain threshold of hair loss, which motivates them to pursue a solution. I find that once there is a significant improvement, and a stable appearance for several years, they feel better and less anxious about their hair. 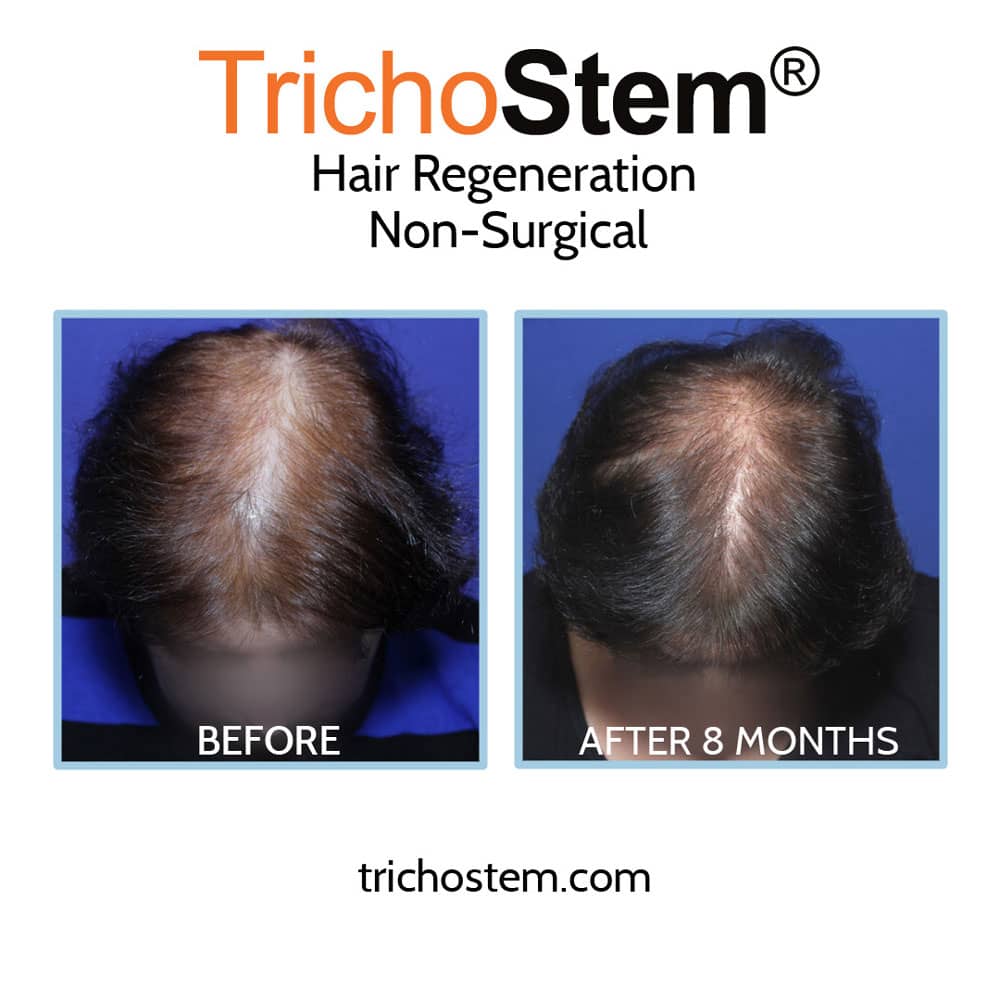 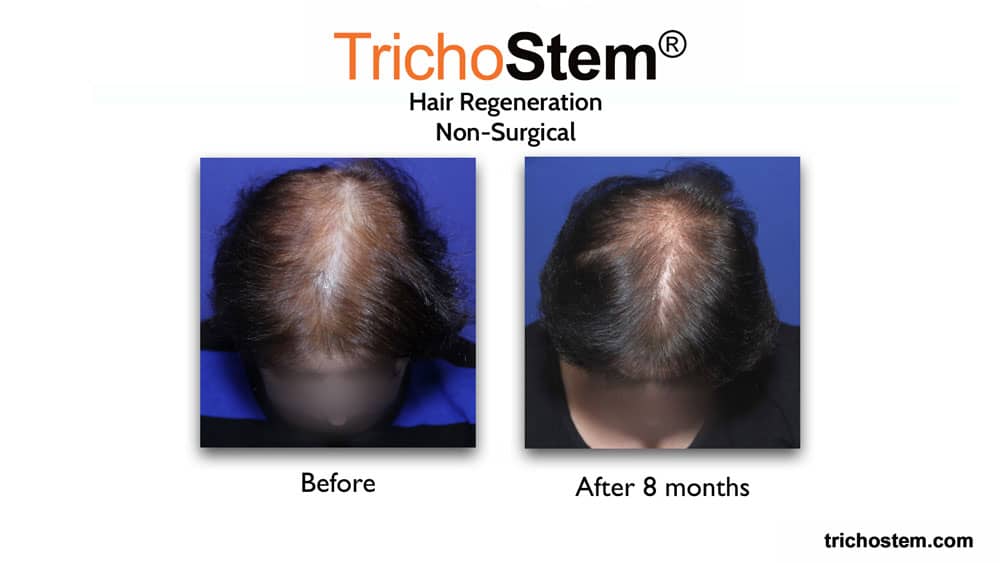 In addition, we’ve treated many people who want to optimize their hair transplant results by coming in within the first three months after their surgery. The benefits of improving the hair transplant healing process coupled with the reactivation and thickening of existing hair help to optimize scalp coverage after surgery. 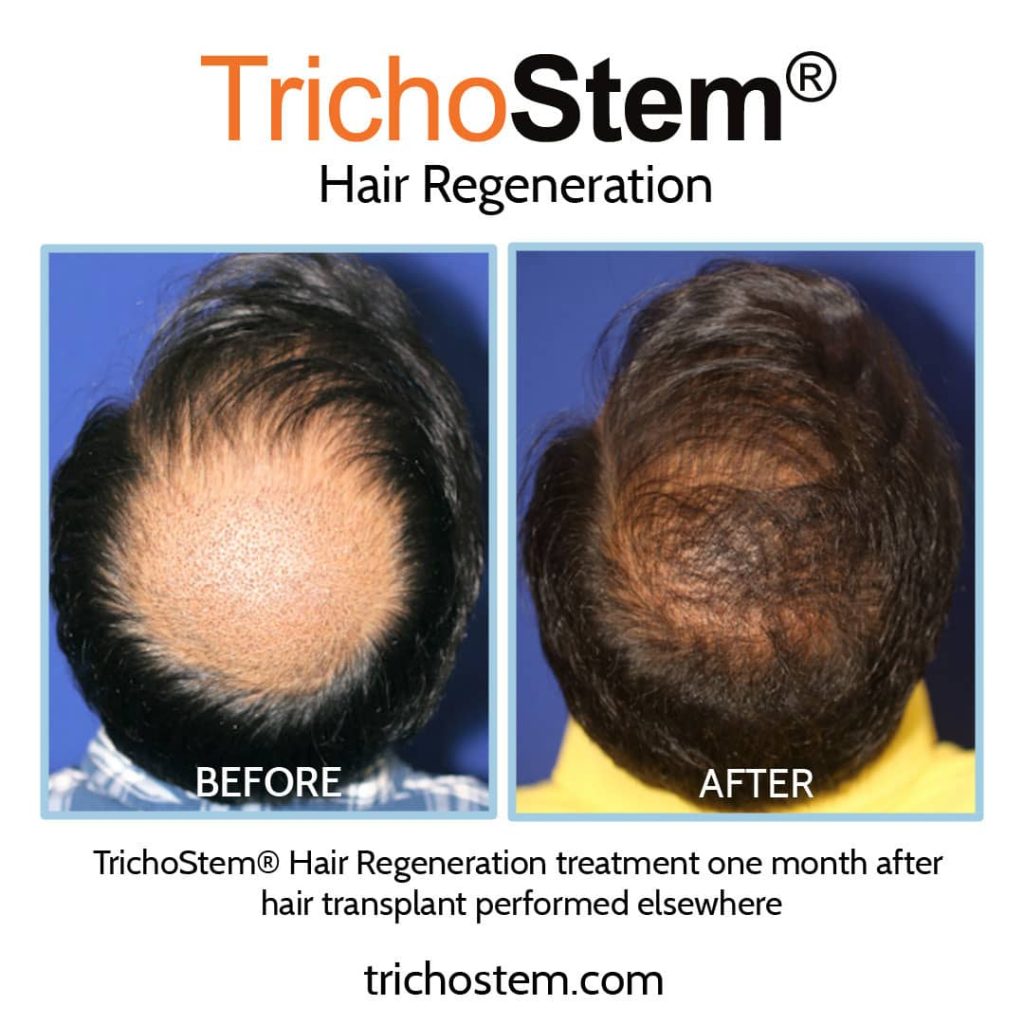 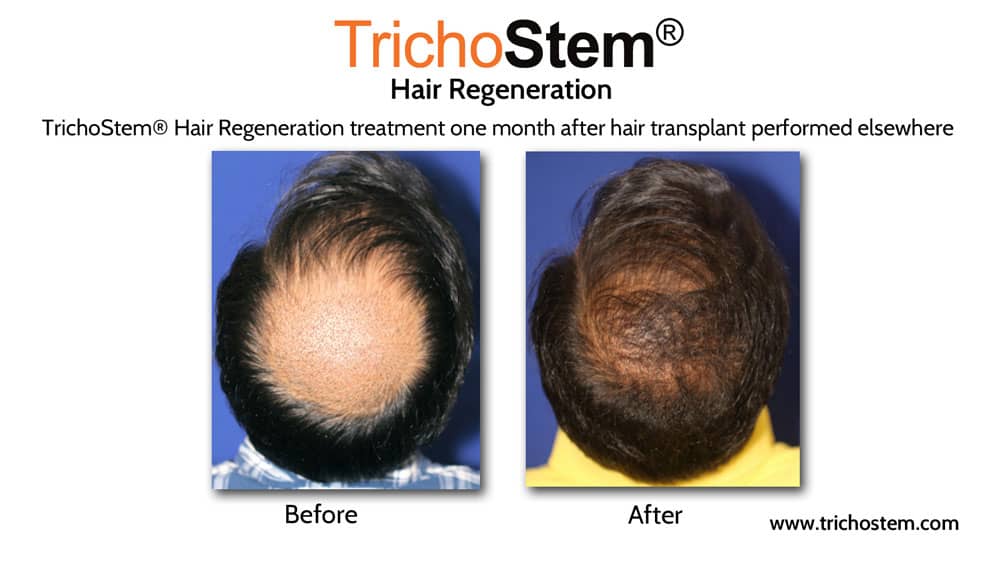 The best way to minimize hair transplant scars is to not have a hair transplant at all. If hair transplant is going to be necessary, then I would suggest considering non-surgical options to maximize the coverage and longevity of your existing hair before considering hair transplant surgery. For people who want hair in a smooth and bald area, if there is hair present in the mid-scalp and crown, a procedure like TrichoStem Hair Regeneration can improve the total scalp coverage so you won’t need to be as aggressive with surgical hair transplantation.