Upper blepharoplasty is a highly effective cosmetic procedure for improving the appearance of hooded eyes. Specialized procedures, such as Asian eyelid surgery or Asian blepharoplasty, can be performed to make you appear to have a natural crease that reveals the beautiful shape of your eyes. Ptosis correction surgery is a more specialized eyelid surgery to correct drooping eyelids. Successful cosmetic upper eyelid surgery does not draw attention because it appears natural, and complements the individual’s facial features.

Cosmetic upper eyelid surgery is a complex art to achieve attractive, and natural looking eyes. It’s also a science that necessitates scientific precision to the point where the difference between excellent results, and complications, which are separated by millimeters. I’ll go over the risks of cosmetic upper eyelid surgery, as well as what I do to plan and perform procedures with a high success rate.

What can go wrong with upper blepharoplasty? 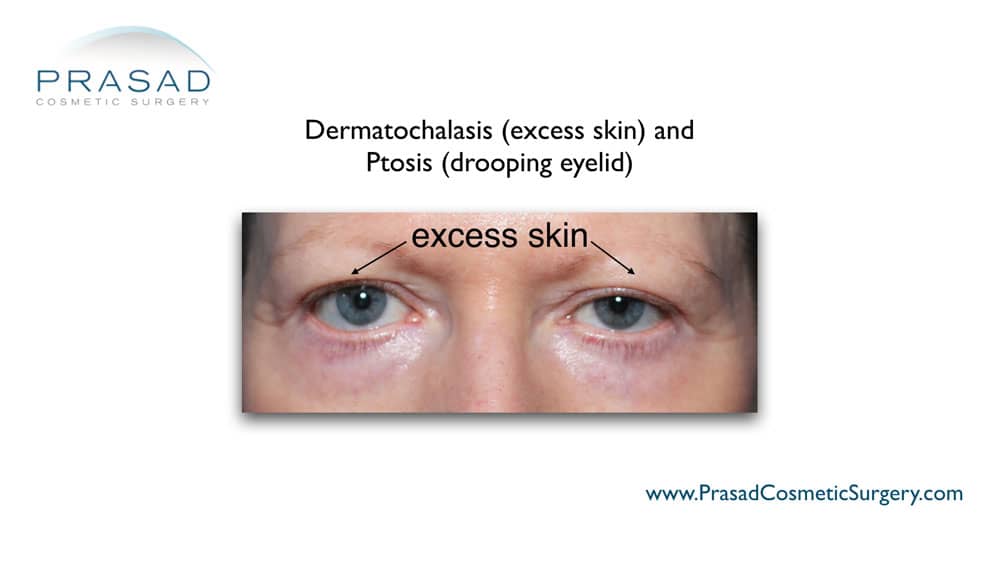 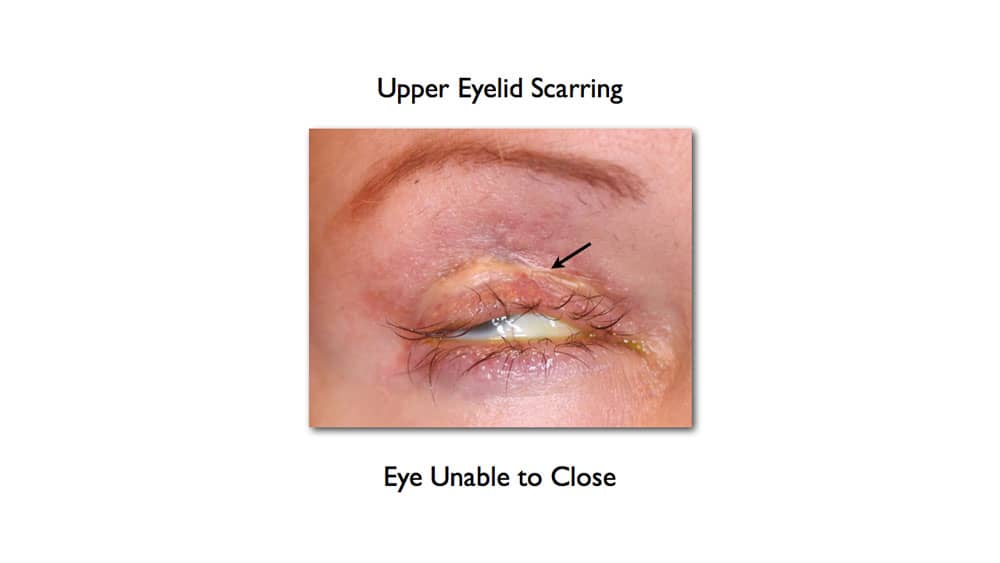 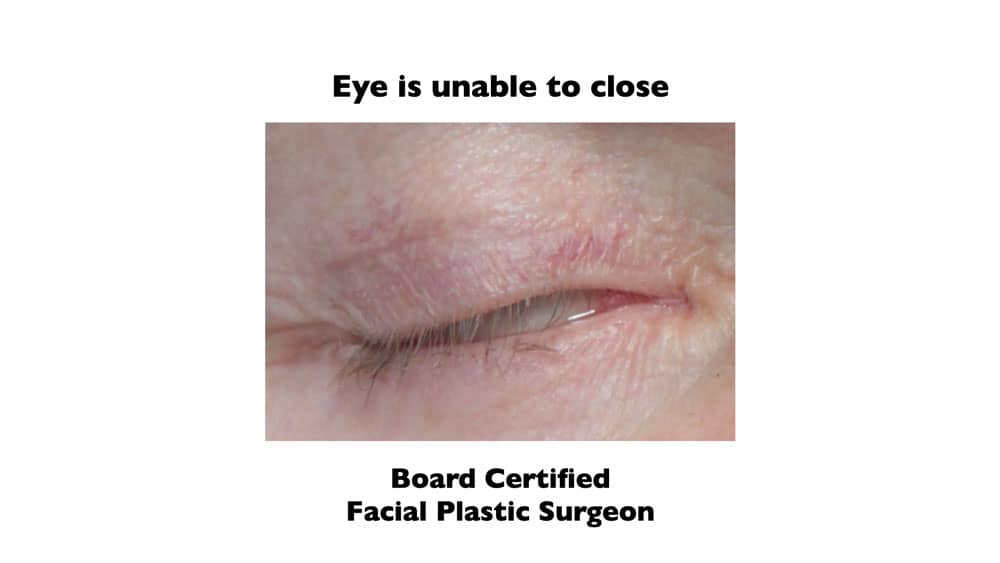 I find that the shape created by this hooding defines the shape of the eyes, and makes them appear tired or angry. Eyelid skin must be removed to treat the hooded appearance. A first impression of how to deal with excess skin may be to simply pinch it, and remove what is being pinched, but it’s actually not that simple. The upper eyelid must move easily when blinking to distribute the tear film over the eyes and provide proper lubrication, so you must leave enough skin behind for this action to occur. 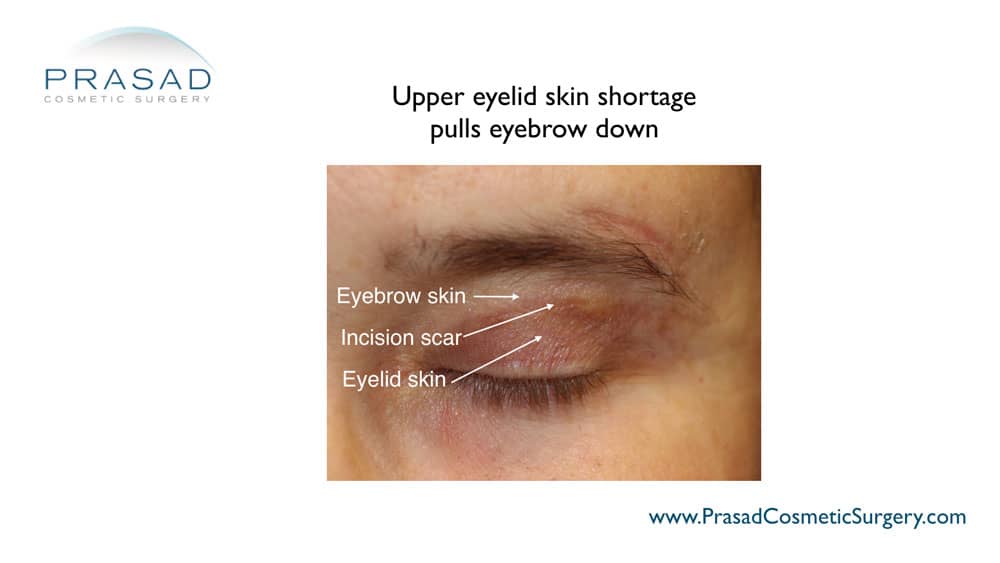 In addition, the skin below the brow may have descended because of the eyebrows being in a lower position, what is referred to as “eyebrow ptosis”. During the skin pinching process, there may be recruitment of skin below the brow, causing downward displacement of the brow and keeping the eyes looking hooded. Furthermore, this level of skin removal can cause the brow to move closer to the eyelid (not a good look). The elasticity of the skin is critical in determining the amount of skin that needs to be removed. If the skin has little stretch, less skin is removed; if the skin is very elastic, more skin is removed. 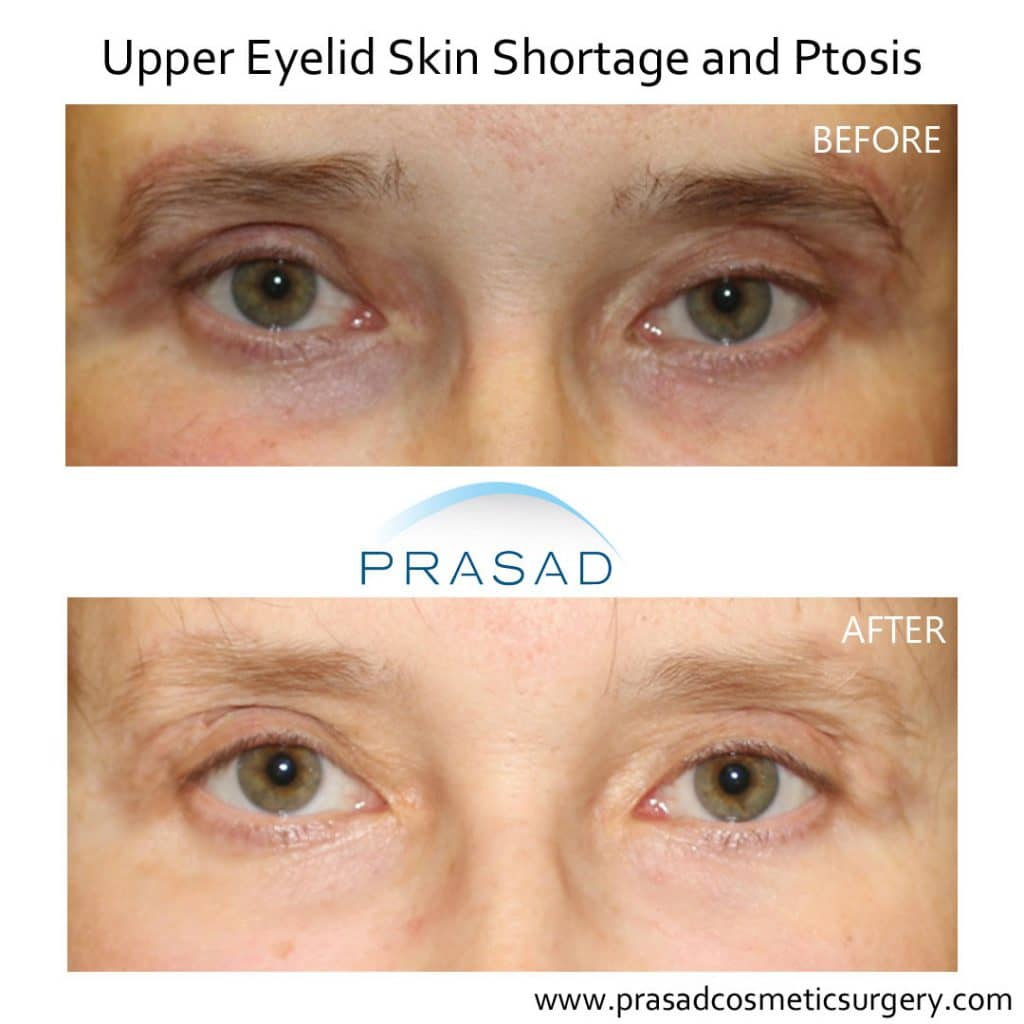 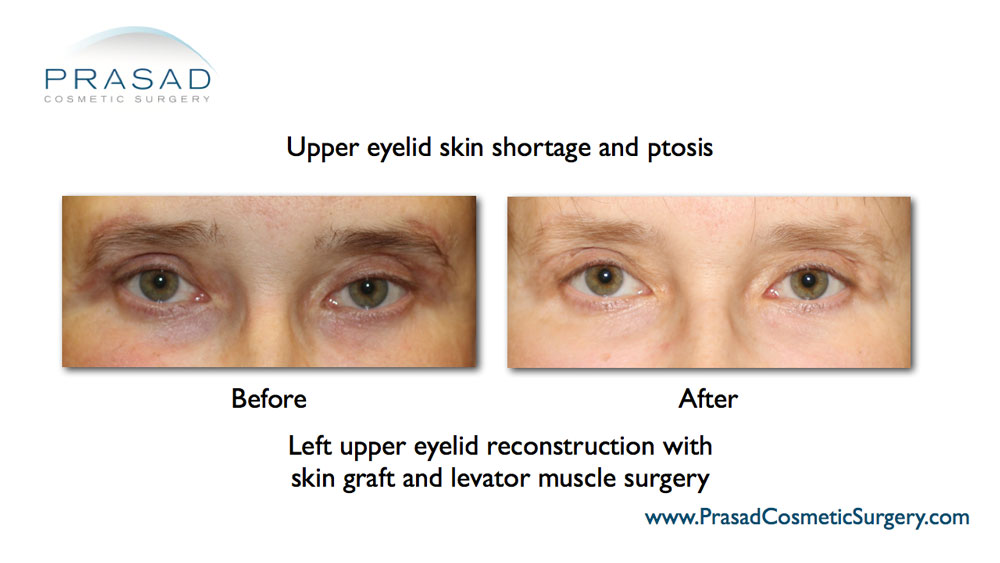 When too much skin is removed, the function of the eyelids may be compromised. Patients who have skin shortages after upper eyelid blepharoplasty frequently complain of their eye or eyes appearing too open, and experiencing discomfort when blinking. They also claim that when they sleep, their eyes do not close. These patients frequently require dry eye therapies, such as the application of artificial tears and lubricating gel or ointment at night. Patients who come to me in this situation usually require skin graft surgery to restore the skin required for proper eye function. 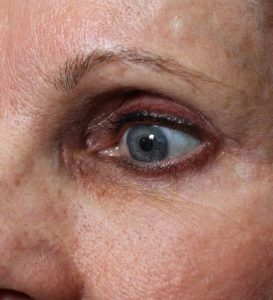 So, how can I reduce the risk of skin shortage after surgery? When I design, I consider skin elasticity, brow position, and eye health, so I spend a lot of time measuring. The placement of the eyelid crease, as well as where the skin removal should begin, and end in relation to the inner and outer corners of the eye, are also an art. I also give an estimate of how the patient’s upper eyelids will look by dislocating the skin inward with an instrument or a Q-Tip to reveal a more defined eyelid crease. 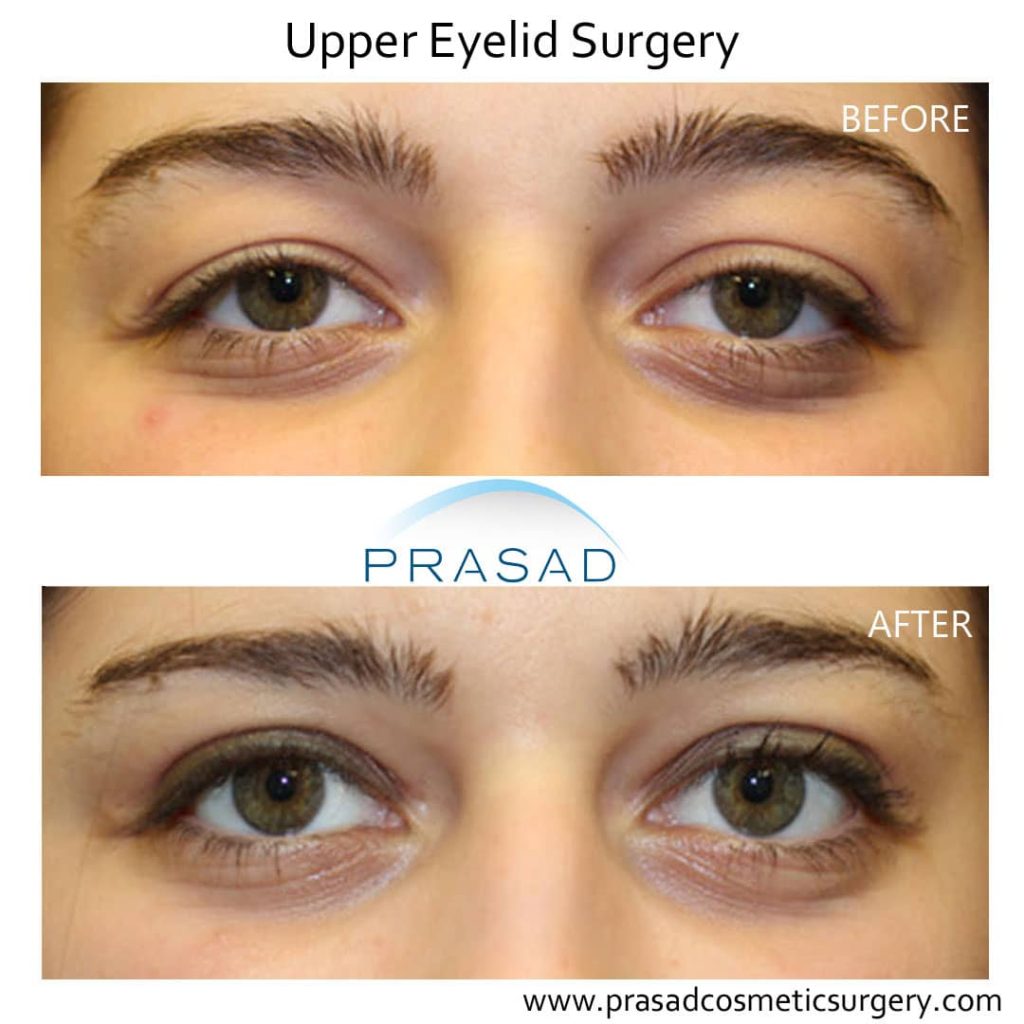 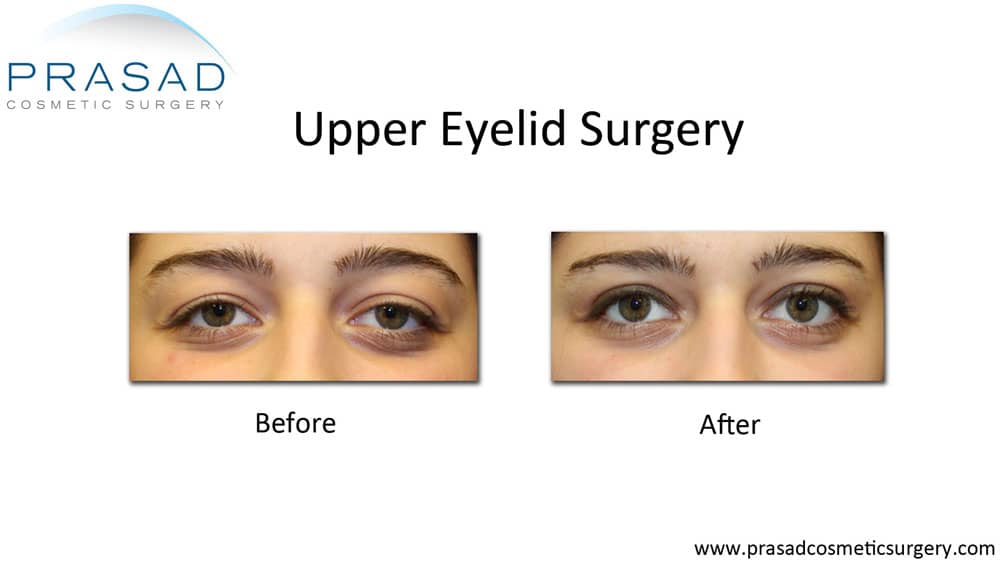 Cosmetic upper eyelid surgery involves not only redundant skin, but also fat in two distinct areas. The first is known as orbital fat. In the space between the bone and the muscle that lifts the eyelid, known as the “levator muscle,” there are two fat compartments and the lacrimal gland. The volume and position of prolapsed orbital fat, as well as the position of the lacrimal gland, all have an impact on the appearance of the upper eyelid. This is why upper eyelid blepharoplasty is more than just skin removal. You must be able to anticipate the appearance that will result from sculpting the prolapsed fat in the upper eyelids as the surgeon. 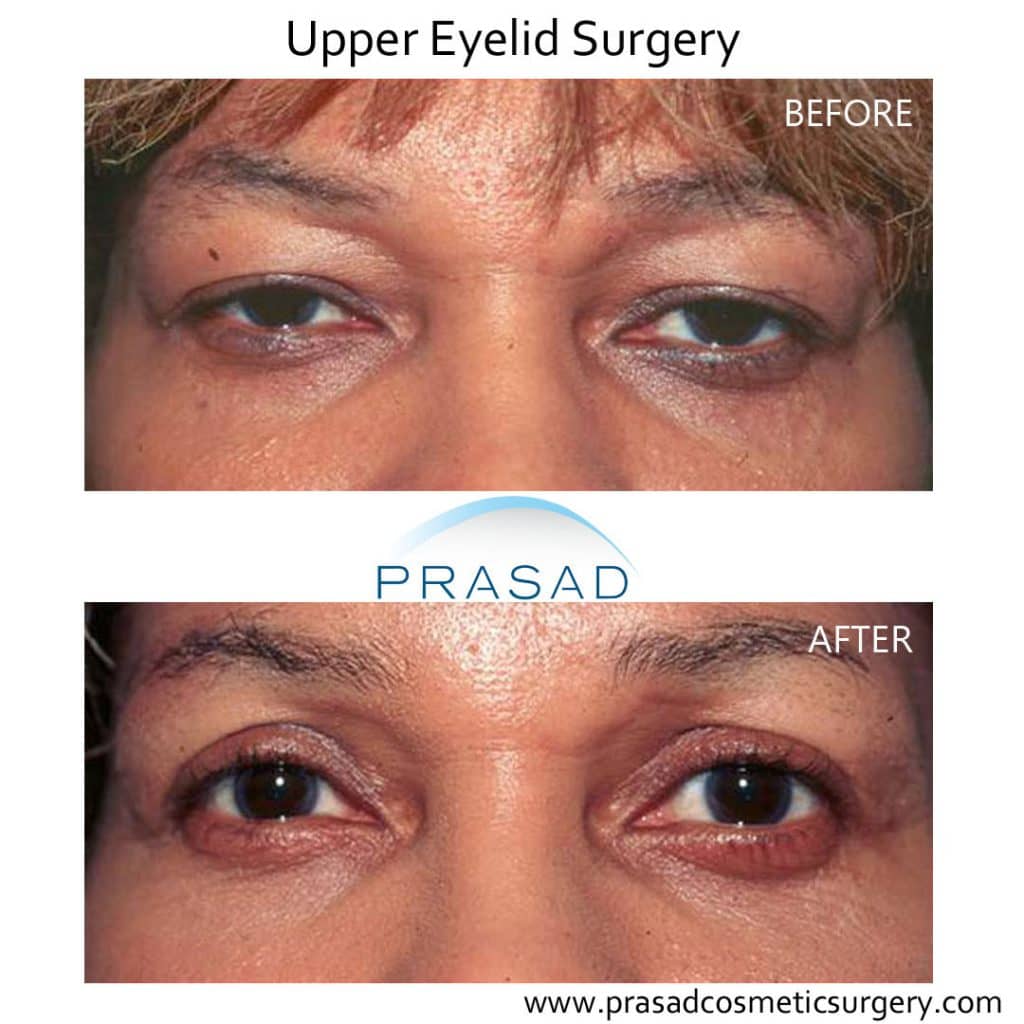 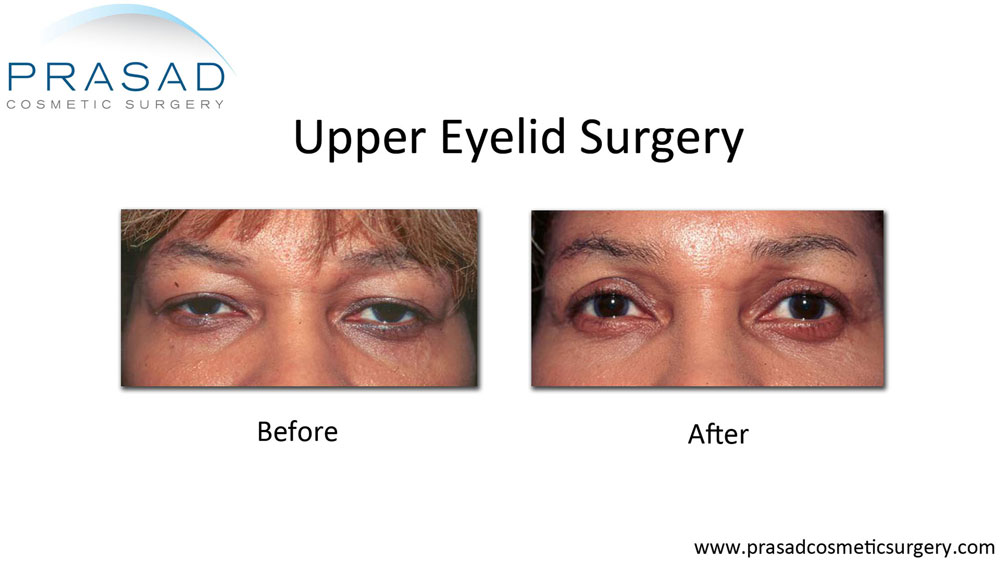 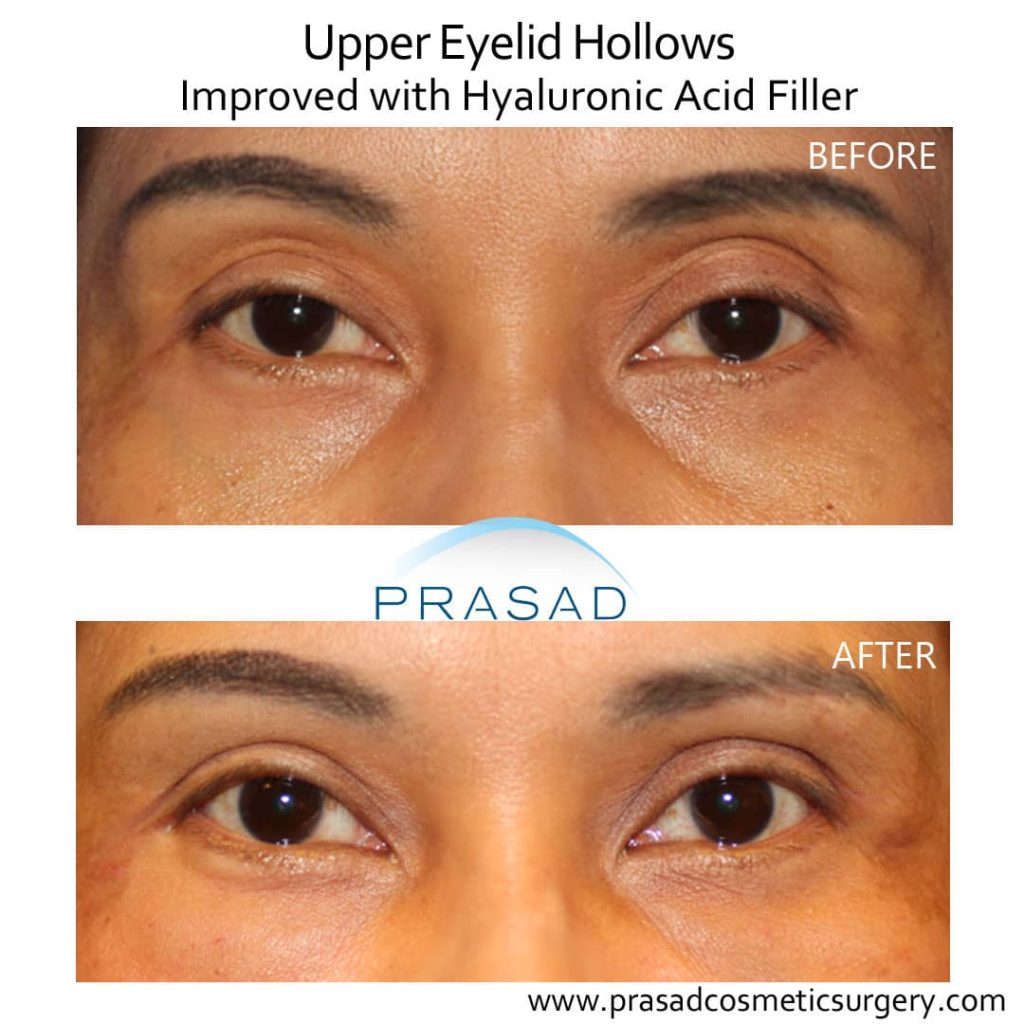 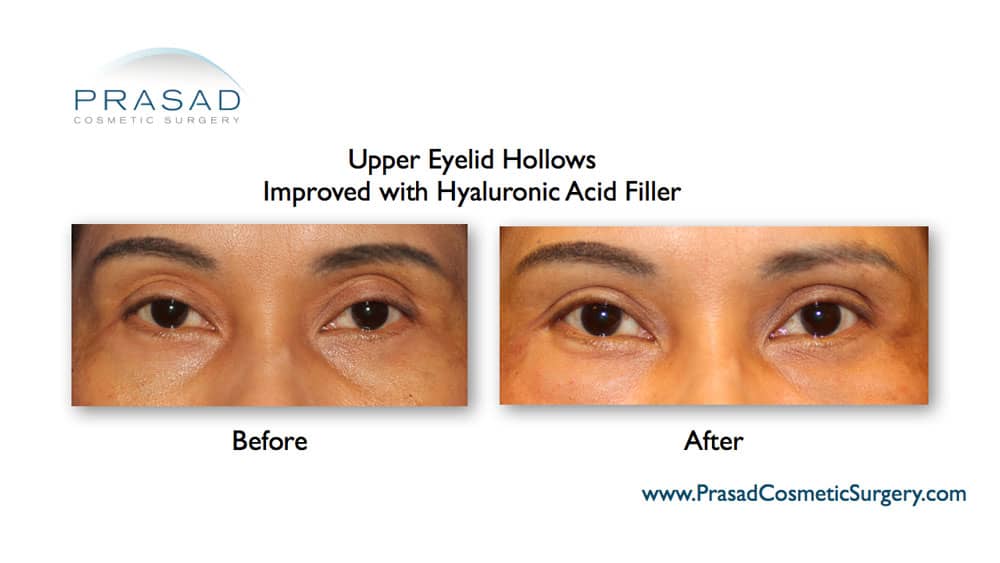 I frequently see patients who have had previous surgery and are concerned about having had too much fat removed. They’re looking for a way to regain some fullness around their eyes. There are a variety of surgical options available, including fat grafting and dermis fat graft surgery. The challenge is that there may be a limited blood supply in this area, particularly after surgery. A tissue graft’s viability could be jeopardized by a lack of blood supply. I’ve discovered that using hyaluronic acid filler to restore fullness has been extremely reliable in achieving immediate improvement. My technique allows me to place volume with great precision, and my patients do not need to recover as they would after surgery. 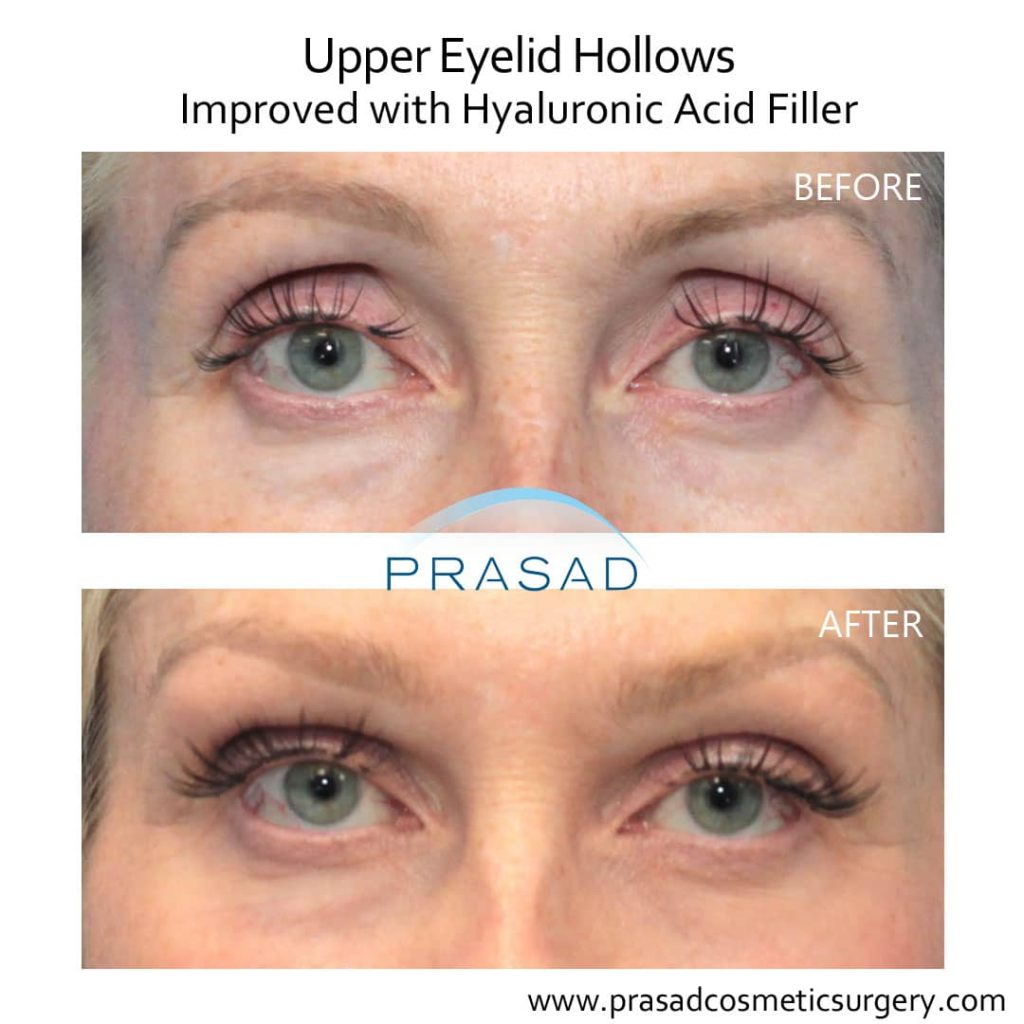 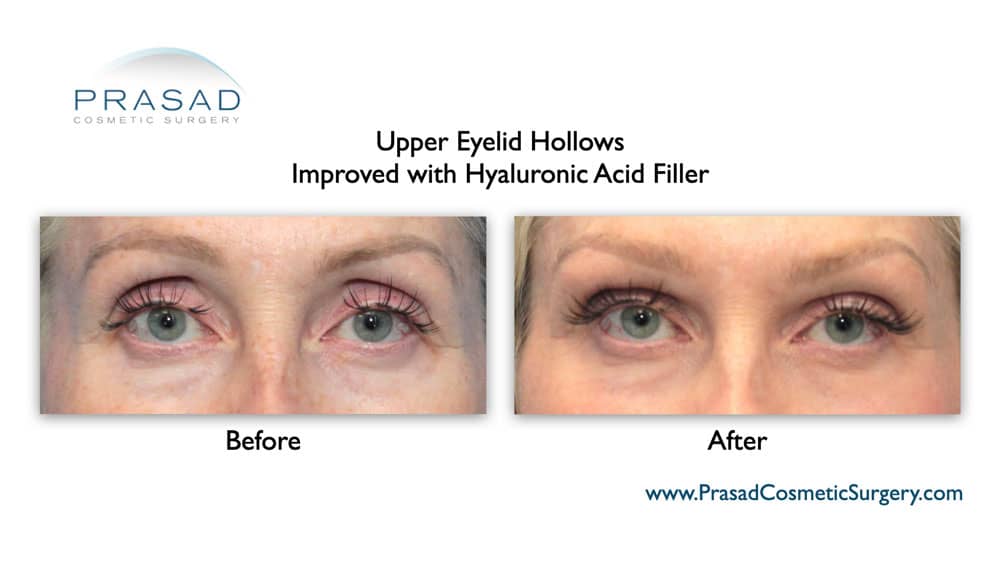 Another common problem I see is failing to address the presence of eyelid ptosis. Eyelid ptosis occurs when the eyelid’s margin is lower than it should be. General plastic surgeons, in my experience, choose not to treat eyelid ptosis, assuming that removal of skin and fat will suffice. As a cosmetic oculofacial plastic surgeon, I strongly oppose this “head in the sand” approach. You appear tired or sleepy if your upper eyelid is too low. As a result, if ptosis is not identified and treated, the eyelids will remain droopy even after surgery. 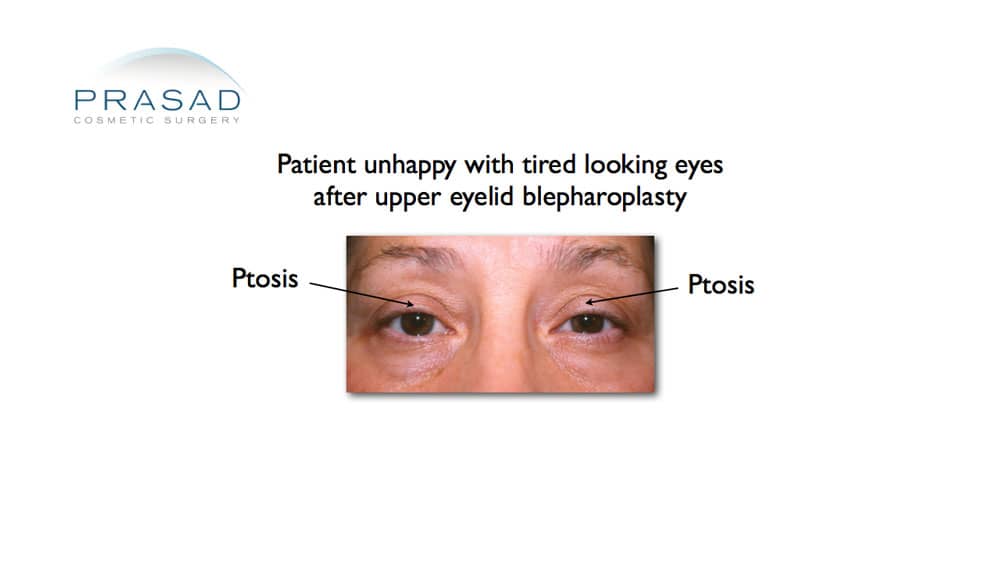 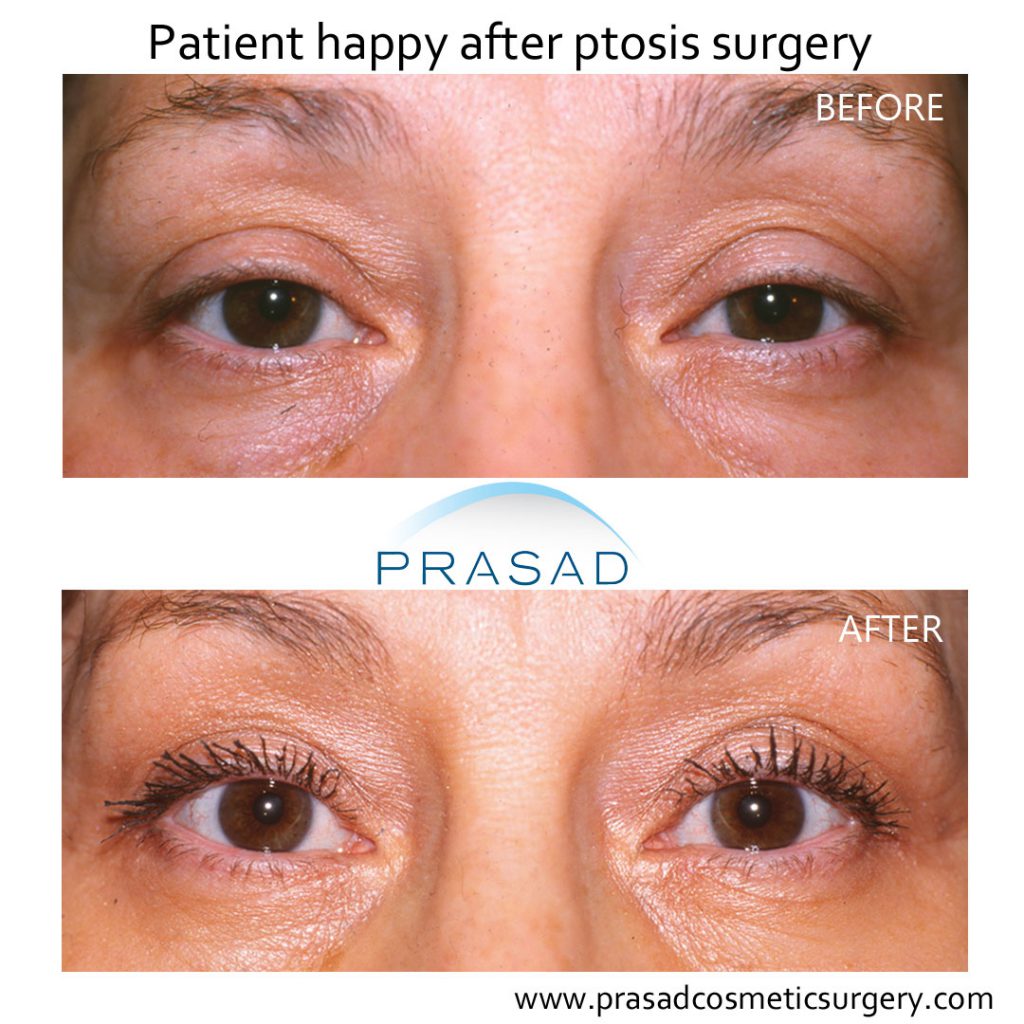 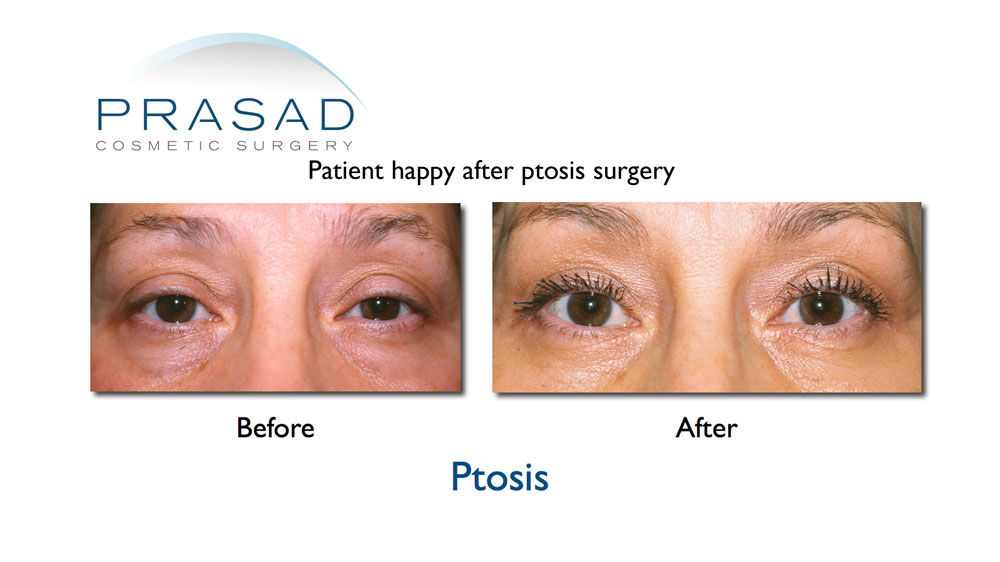 If a patient has ptosis, and is going to have an upper eyelid blepharoplasty, I can operate on the levator muscle as well as the Mueller’s muscle. These are not procedures typically performed by general plastic surgeons. Brighter looking eyes after ptosis surgery with blepharoplasty can be very gratifying for the patient. 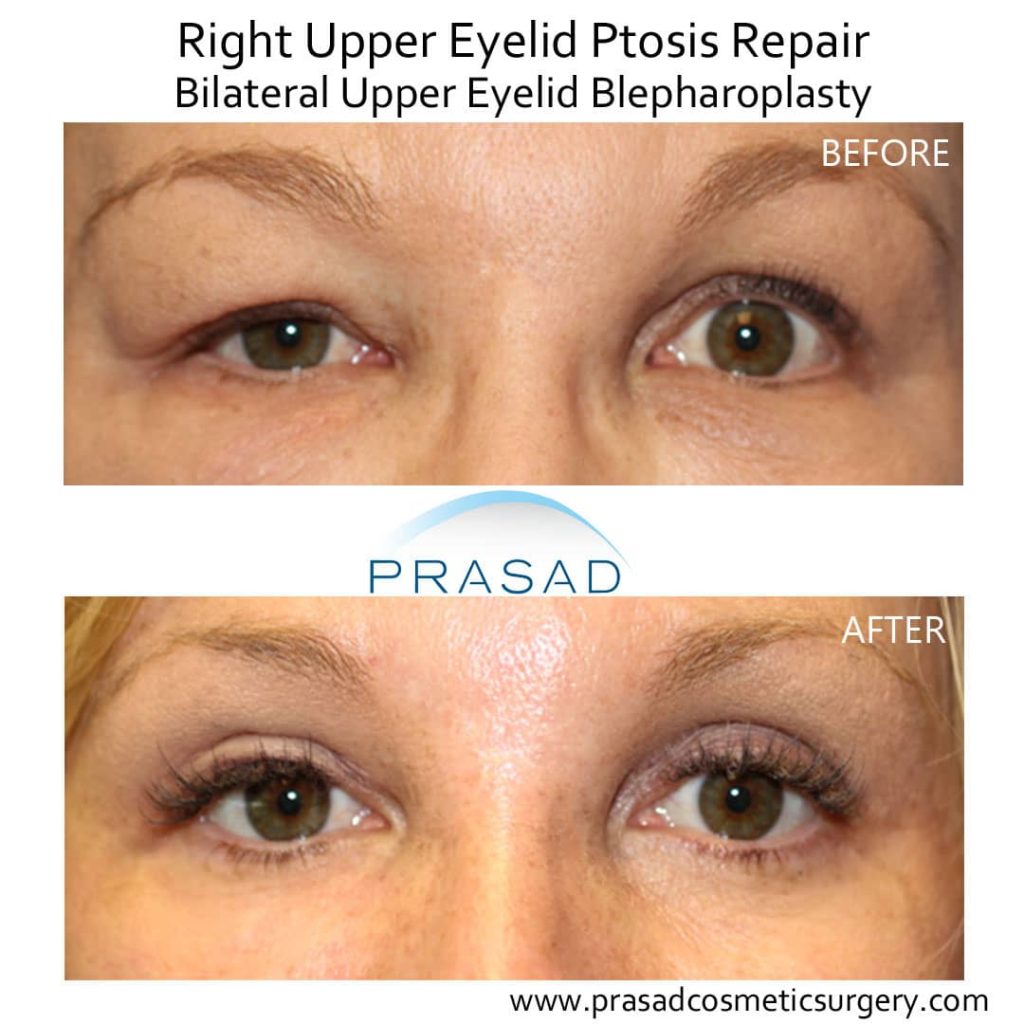 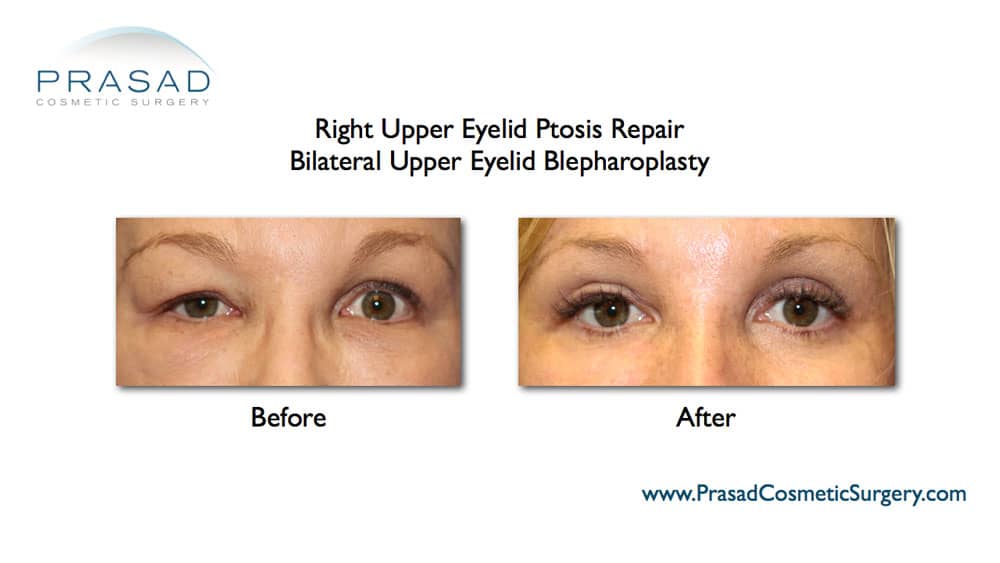 How to Avoid Blepharoplasty Complications?

Any surgery has risks, but those risks can be reduced by the operating surgeon’s experience, and expertise. You don’t want to choose eyelid surgery based on price, or on the assumption that all eyelid surgery procedures are the same. As business and marketing in elective healthcare services become more commoditized (for example, advertisements for discounted liposuction), you, the patient, must become your own advocate. Eyelid surgery is unique in that the results of a cosmetic procedure can affect your vision, as well as your appearance. I hope this information was useful to you. 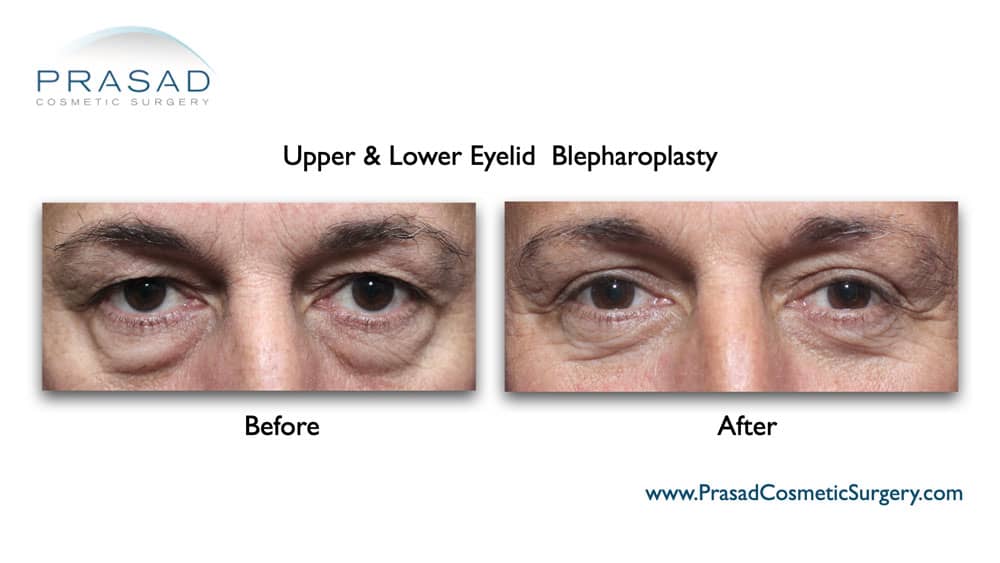 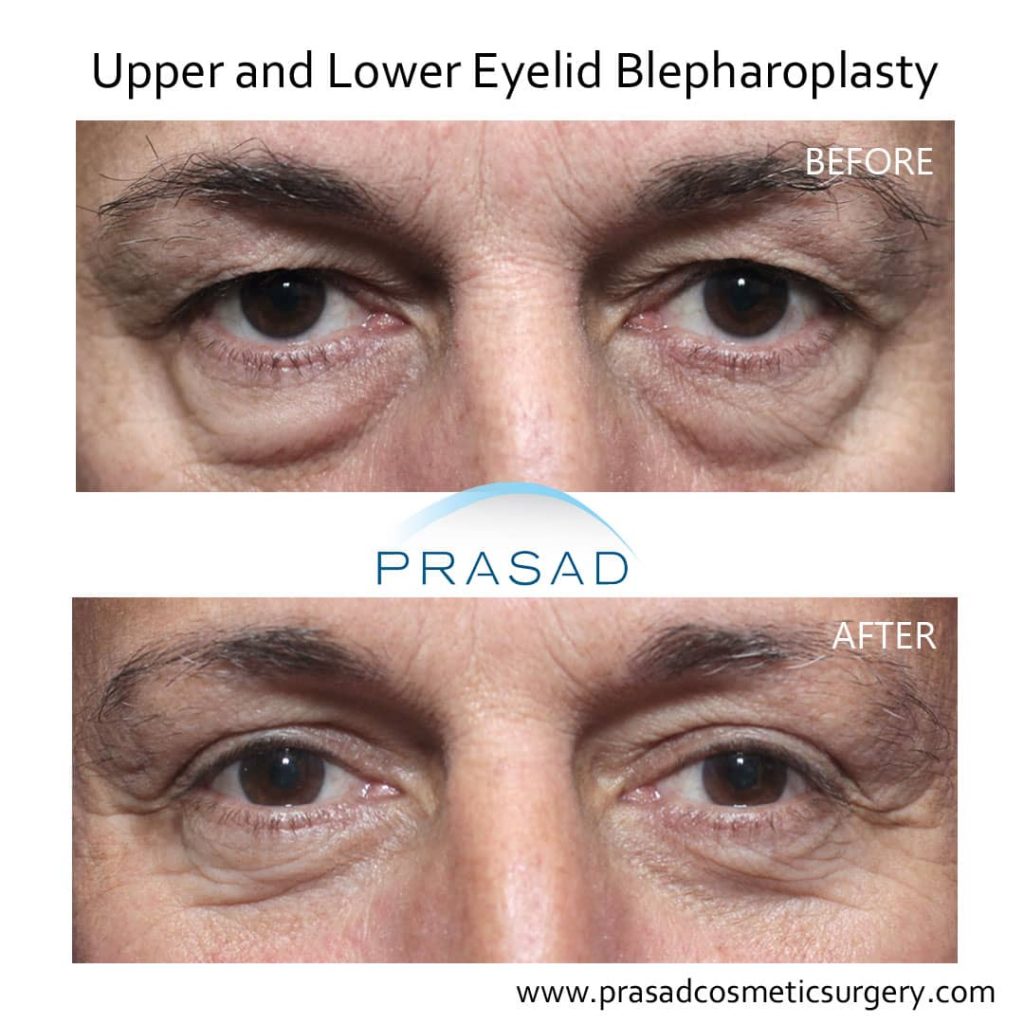