Can Fillers Help with Under Eye Bags?

As a cosmetic eyelid surgery specialist, I perform a wide range of eyelid procedures every day such as eye bag removal, treatment of upper eyelid hooding, Asian double eyelid surgery, and oculoplastic specialty procedures such as eyelid ptosis correction, orbital surgery, and lacrimal system surgery. I am also well known for my work with injectable fillers for the face, particularly in the eye area, cheeks, chin, jawline, and forehead. Unlike physicians who cannot perform surgery, I am not limited or biased in treating the under eye area with any modality. 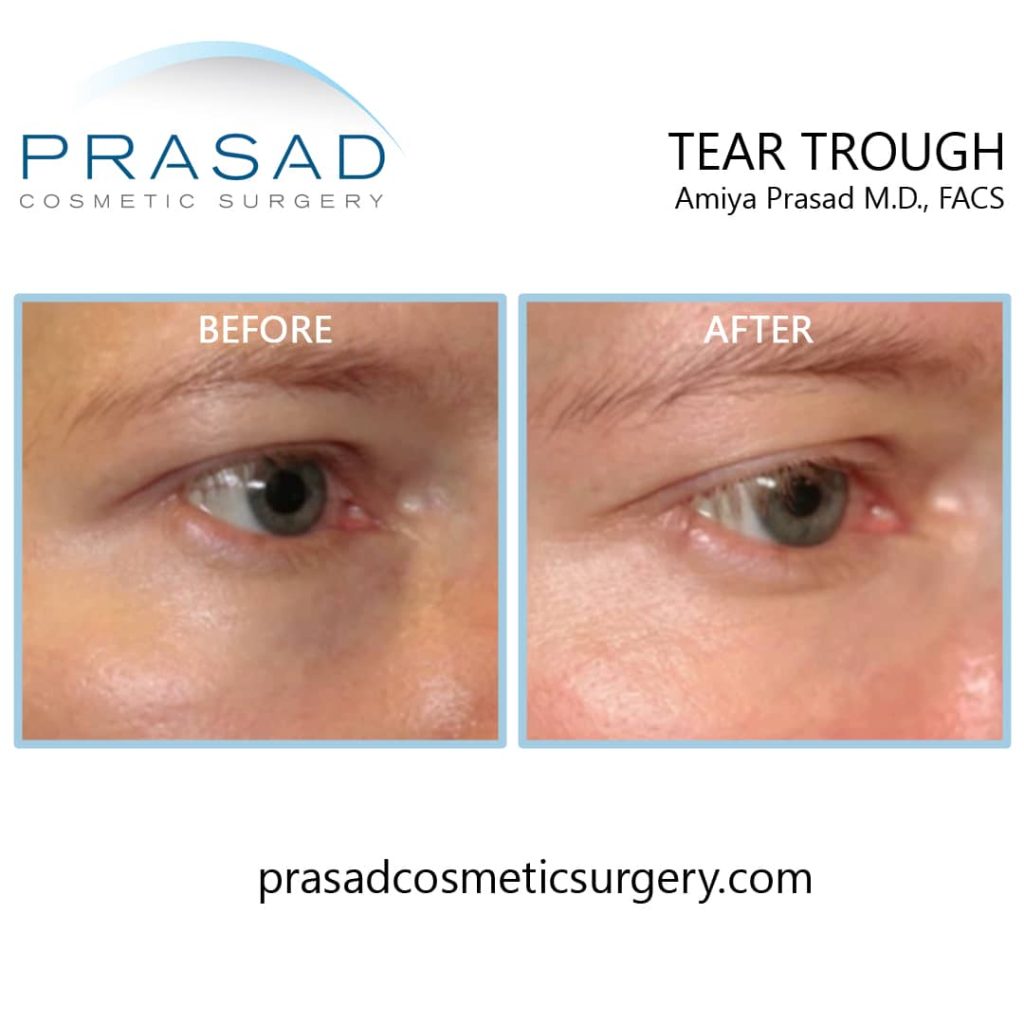 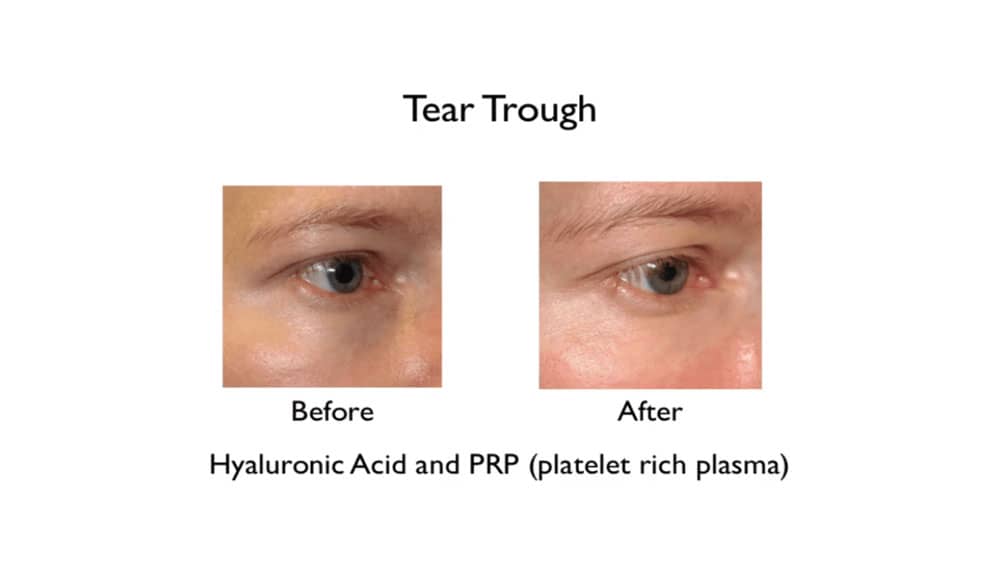 Many people with under eye bags are relatively young, and often hesitant to consider surgery preferring to have the under eye area treated with filler. While eye bags can occur and become more prominent due to age, they are mostly caused by genetics so they can occur as early as during the teen years, and in some cases even younger.

What Causes Bags Under Eyes?

Eye bags are caused by orbital fat that normally surrounds the eyes, and can push forward like a hernia. This is why the fat that causes eye bags is referred to as herniated fat. Fat herniation under the eyes is called lower eyelid fat prolapse. During the consultation, I look at the prominence of the fat, and the relationship of the herniated fat to the surrounding bone structure.

How Fillers Can Help Mild Under Eye Bags

There is an area below the under eye bag called the tear trough. I look to see if the puffiness can be blended with filler placed in the tear trough. Generally, I use soft tissue fillers such as Restylane or Juvéderm in this area as long as the under eye bags aren’t too prominent. It’s important to understand that fillers improve the appearance of eye bags, not by reducing projection, but by adding projection to the adjacent area. In some situations when the bags are too prominent for optimal blending, I perform this procedure as a short-term solution for people who want to look better, but will undergo surgery later on. 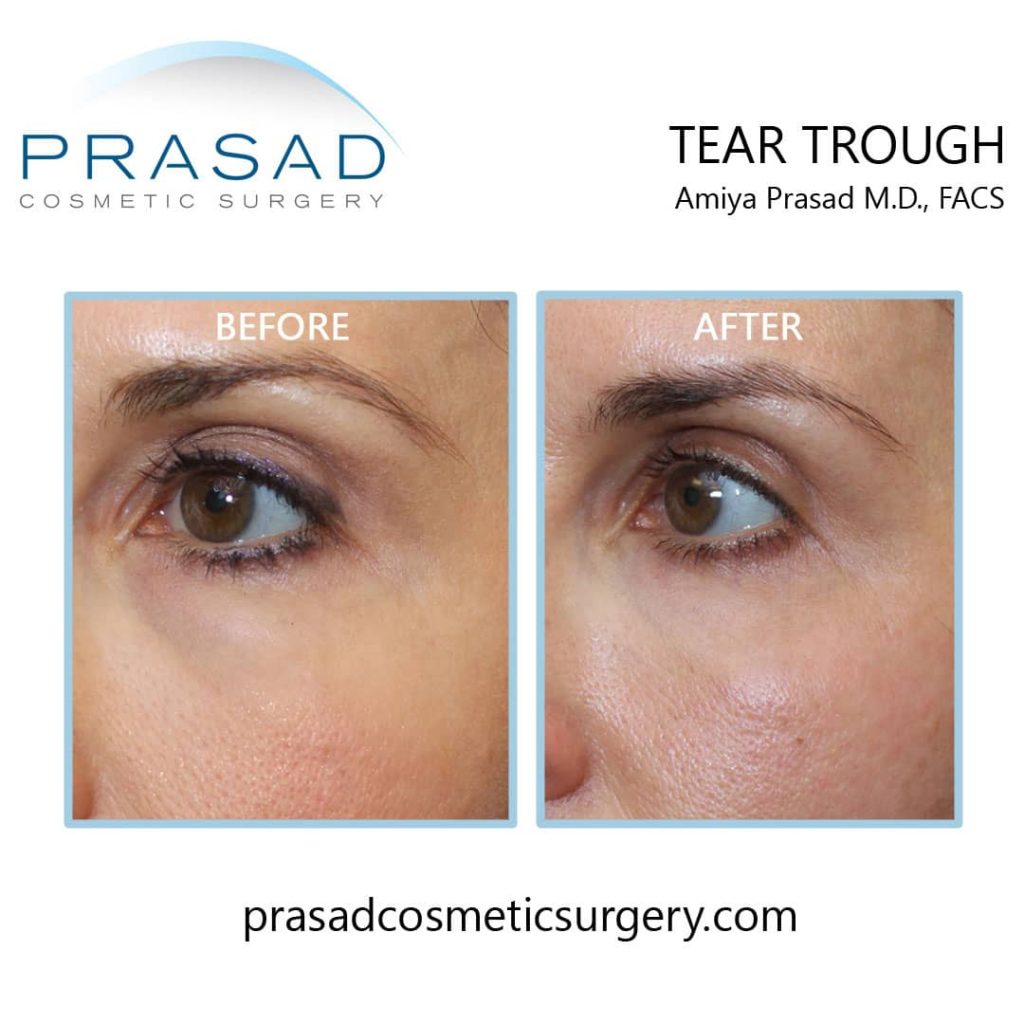 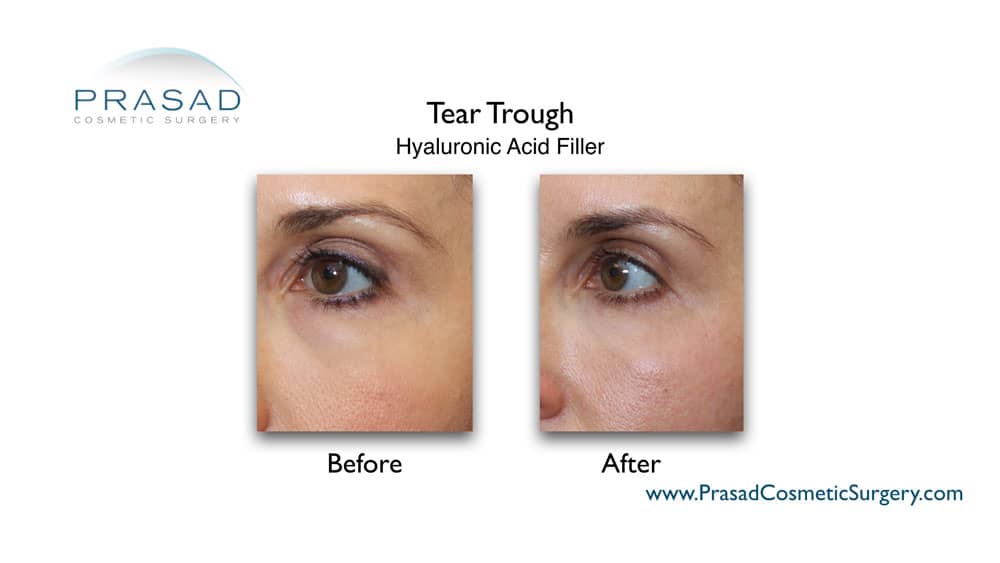 If the under eye bag projection is passed a certain limit, as in the case of more prominent or severe eye bags, then adding additional volume may not blend the contour of the eye bags, and add more puffiness to the area, making the eye bags look even more prominent. When selecting a doctor, keep this in mind that many doctors who are not surgeons will choose filler to treat all eye bag cases, which means in many situations, the filler placement can result in bigger eye bags.

When eye bags are passed a certain level of projection, fillers are not appropriate, so surgery is the treatment of choice. Surgery for under eye bags is referred to as lower eyelid blepharoplasty. There are two techniques: one is called the transcutaneous approach where an incision is made below the eyelashes, to address the fat bags; the other approach is referred to as the transconjunctival approach where the fat pockets are addressed from the inside of the eyelids. 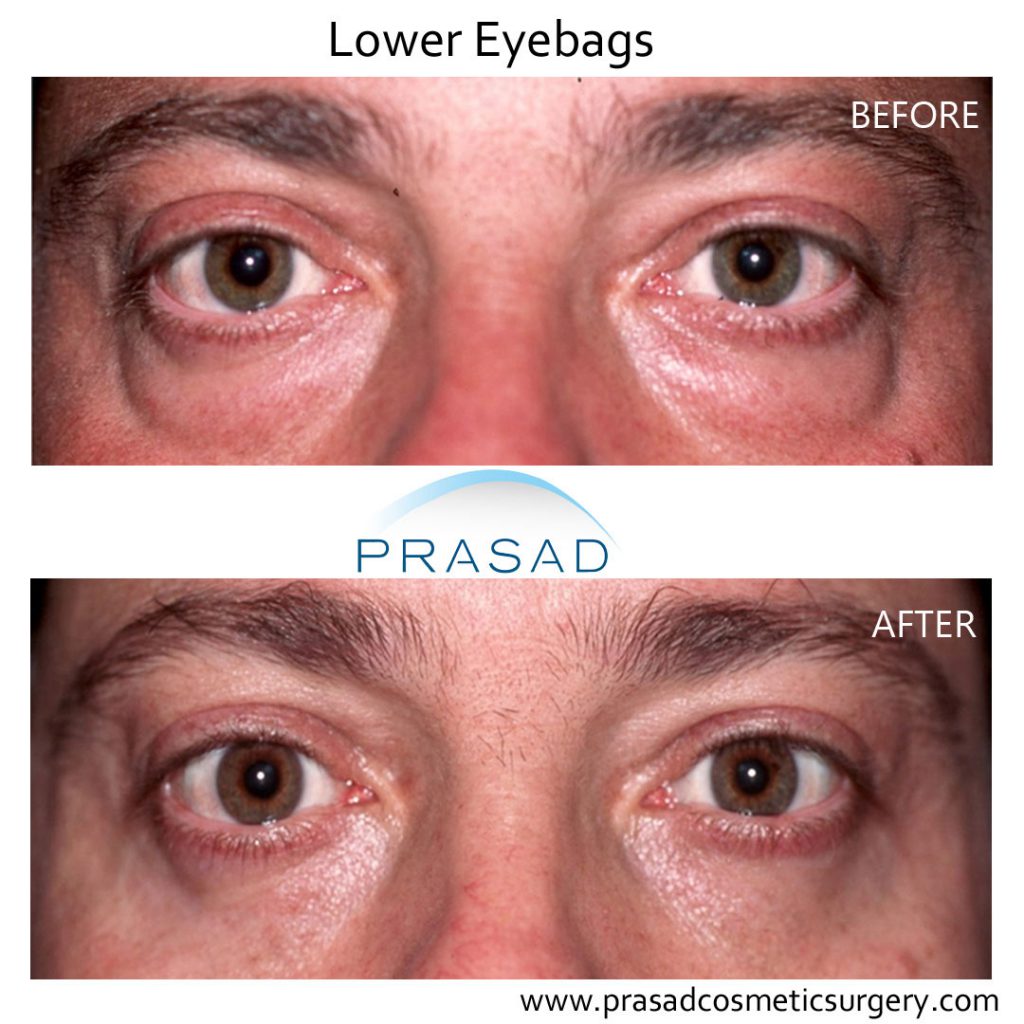 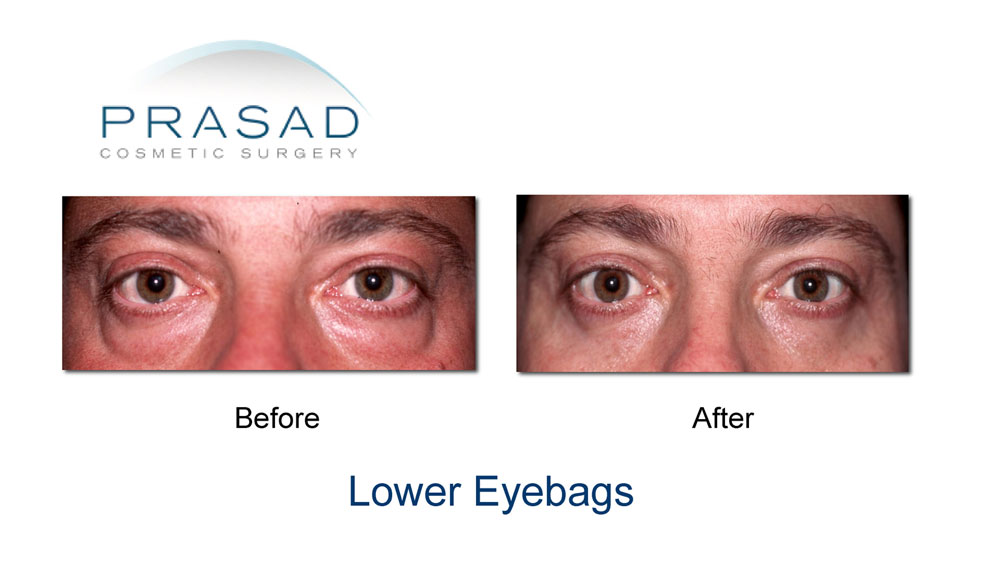 It is common for many doctors to perform the transcutaneous approach to also remove eyelid skin in an attempt to reduce wrinkling. In almost all cases, I strongly advise that lower eyelid skin not be removed as it can lead to complications such as rounding of the eyes, or eye exposure from skin shortage known as lower eyelid retraction. Oftentimes, the inside of the eyelid is exposed and irritated due to skin removal which is called ectropion.

Preferred Procedure for Under Eye Bag

When performing eyelid surgery, I most often sculpt the fat to remove the bulge, but leave some fat behind to create a smooth contour in the lower eyelids, and prevent the lower eyelids from looking hollow.

Lower eyelid surgery is an art, so not all surgeries are performed the same way. Having this procedure done with no external incision allows the results to appear natural, and preservation of fat to prevent hollowed appearance provides for optimal outcomes when performed by experienced surgeons. 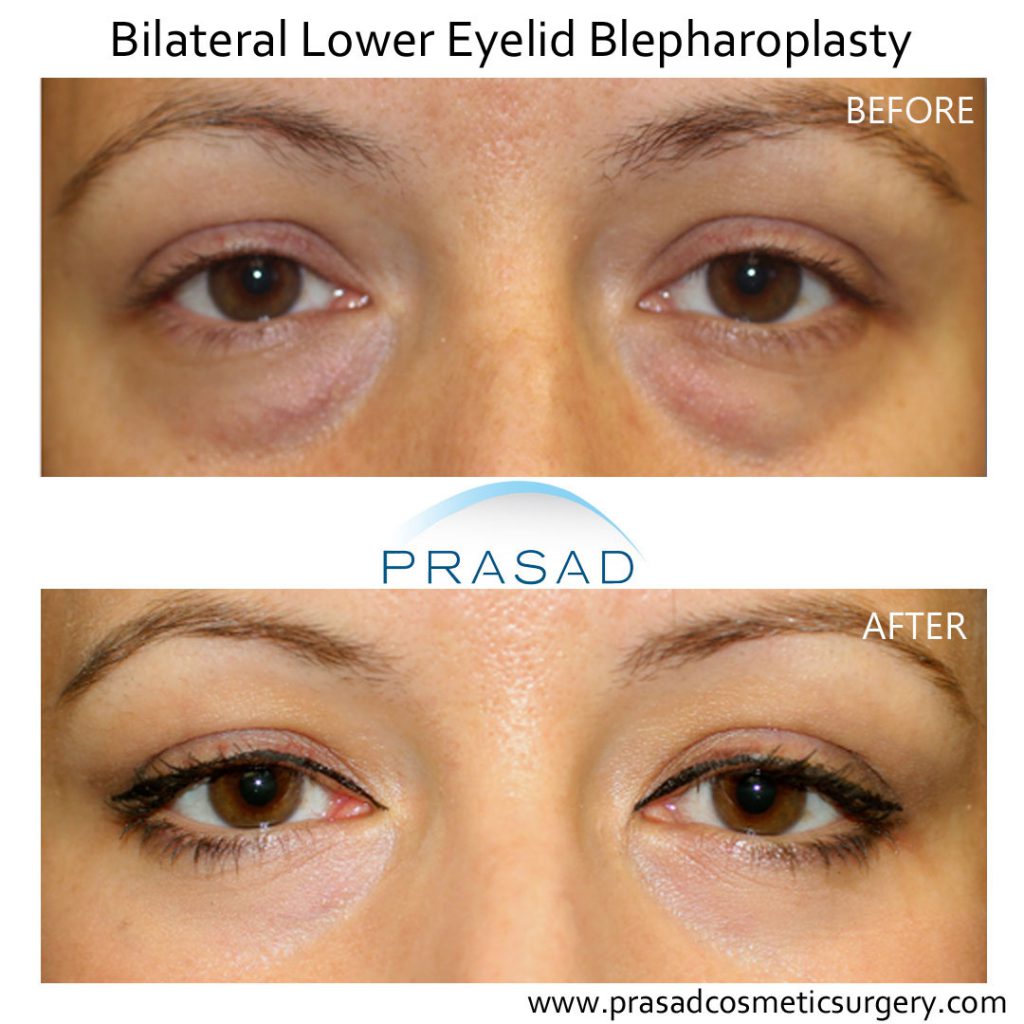 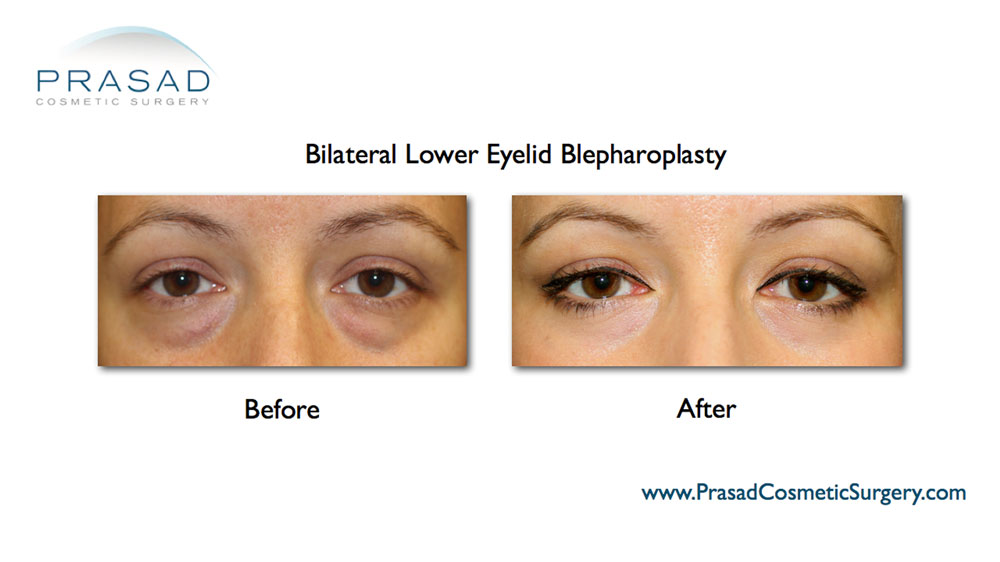 Injectable fillers placed under the eyes are routinely performed with topical anesthetic for patient comfort. In addition, fillers like Restylane-L also contain some anesthetic. I usually prefer instruments such as blunt-tipped cannulas instead of needles to reduce the risk of bruising after the procedure, and to minimize swelling caused by repeated needle entry. Generally, there is minimal downtime, and I see the patient again two weeks after the procedure to see how the filler has settled, and if additional enhancement is needed.

In my practice, eye bag surgery through the transconjunctival method is performed with local anesthesia, with LITE IV sedation for comfort. I prefer local anesthesia with sedation for almost all my surgeries as my patients are more comfortable, and are able to avoid the recovery from the side effects of general anesthesia. Consequently, my approach results in easier recovery, and faster healing from the surgery. Surgery in my practice is performed in our in-office surgical suite. Patients go home after surgery without any difficulty.

As far as downtime, patients can return to work pretty much immediately after under eye filler. Many patients do it over their lunch hour and return to work afterward. There is the possibility of some bruising after the procedure, which typically fades in a few days. 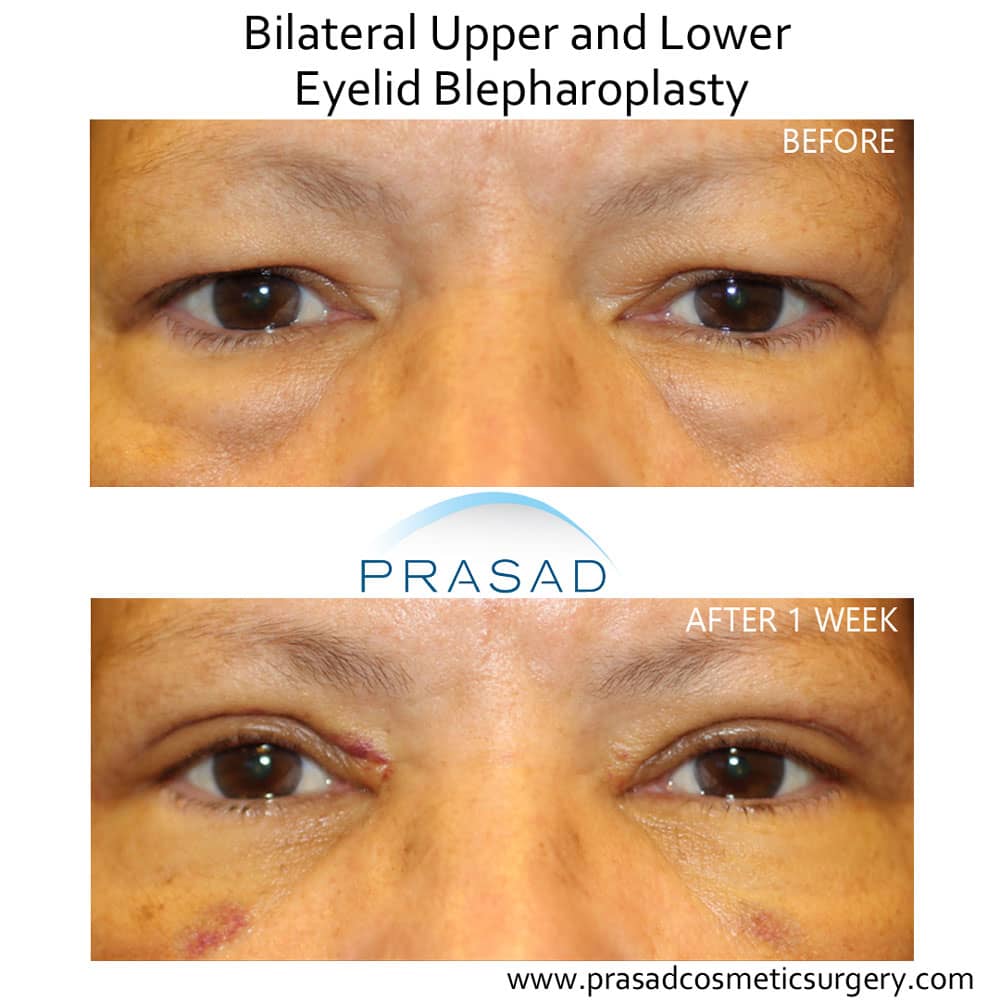 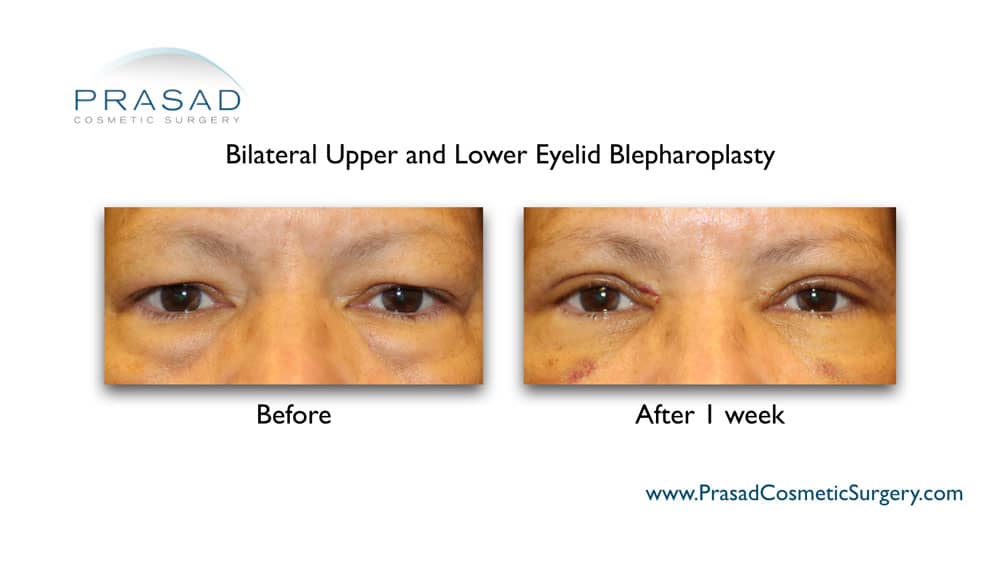 I discuss with my patients how to look at their options from a perspective of procedure longevity. Softer hyaluronic acid fillers like Restylane can last 6 months to 1 year before they are eventually and safely broken down by the body. The benefits of lower eyelid surgery can last many years. Once fat pockets are removed, those fat pockets don’t come back. While there is a chance that other fat around the eyes can prolapse forward, the eyelid appearance can be stable for many years. Neither fillers nor lower eyelid surgery address skin quality such as creepiness. Supplementary procedures for eyelid skin rejuvenation treatments like laser resurfacing, laser wrinkle treatment, and platelet-rich plasma may be considered to address crepey skin, pigmentation, and wrinkles. 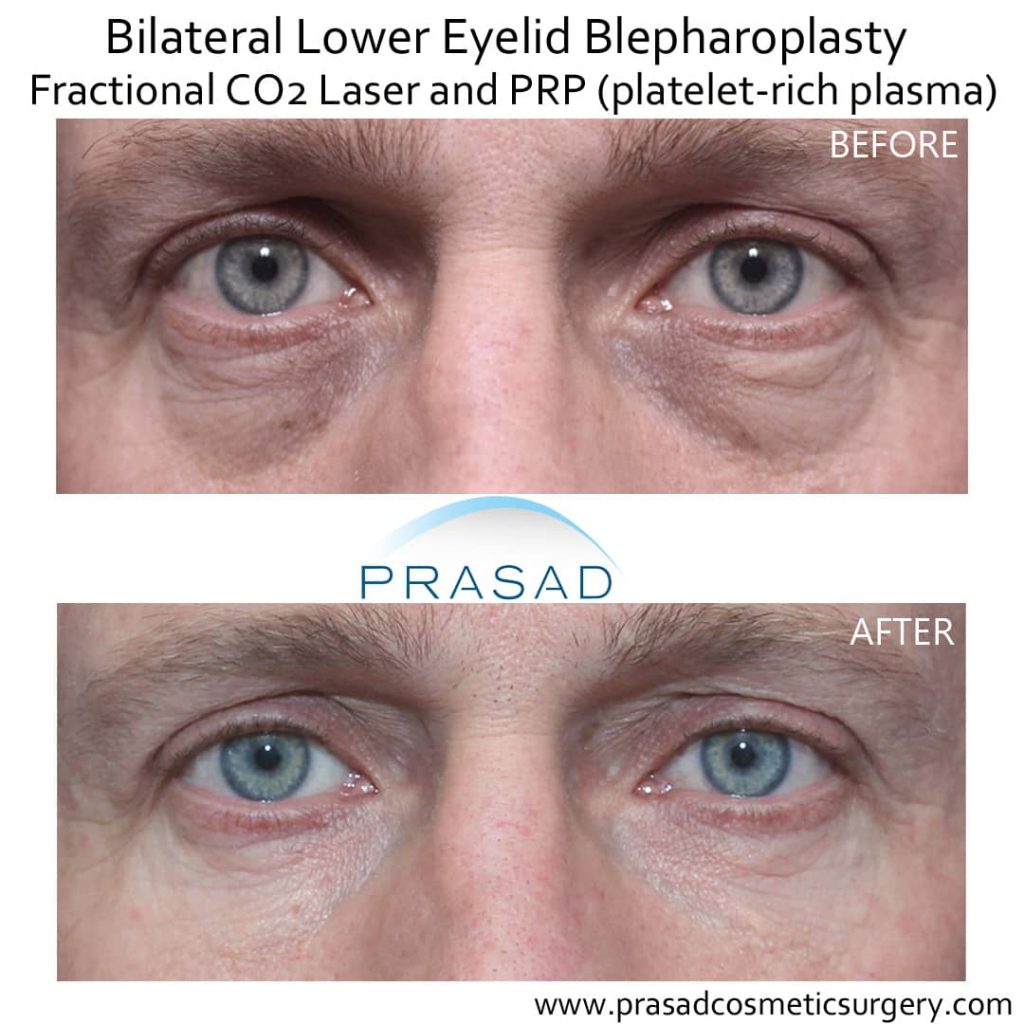 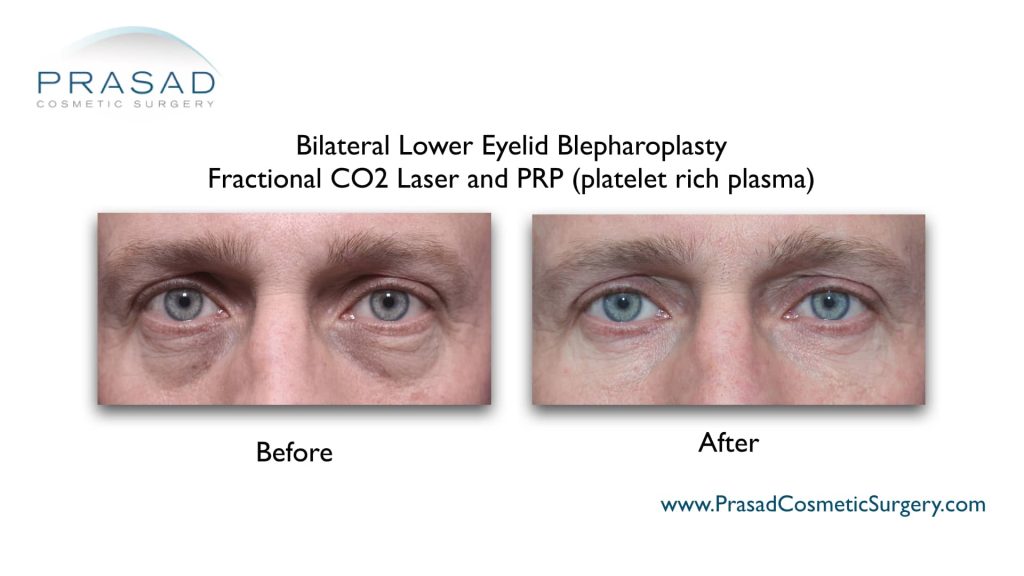 If you want to look good for an event, both filler and surgery can be performed on relatively short notice. I look at each situation and make recommendations based on my experience.

Filler placement is a convenient option for limited eye bags, with minimal to no recovery. Lower eyelid surgery is a more definitive procedure that can be performed for any degree of fat prolapse, with results as if you’ve never had eye bags or surgery. Patients often choose to have filler placement under the assumption that they don’t have time for surgery recovery. In our practice, applying modern, faster healing methods, recovery from eye bag surgery can be comparable to the time it takes for filler results to settle. Lower eyelid blepharoplasty brightens up the whole face with minimal surgery. Many patients who I’ve operated on comment on the ease of their experience with their procedure, and state that if they had known how easy it was, they would have done it sooner. I hope you found this information helpful.