Under Eye Fillers Gone Wrong. What to Do?

Using cosmetic fillers to treat eye bags and under eye hollowing have grown in popularity over the past several years. Many people are unaware that fillers can be placed by doctors, non-physicians like nurses, or aestheticians, and physicians with no surgical experience. The safety of the fillers, the willingness of the manufacturers to sell more products, along with local state laws allow fillers to be used without any standardization or oversight.

A major problem is that fillers are not always the best treatment option. Overlooking the factors which determine who is a better candidate for filler placement has led to many people having too much filler placed under their eyes, which has resulted in the appearance of eye bags, lumps, and irregularities, or even larger eye bags than they had before cosmetic treatment. Fortunately, hyaluronic acid fillers are reversible, and results can be corrected and managed.

I’m well known for my work with upper and lower eyelid surgery, including surgeries for hooded upper eyelids, lower eye bags, double eyelid surgery, and oculoplastic specialty procedures like eyelid ptosis, and lacrimal system surgeries. As an eyelid specialist, I also perform revision work for eyelid surgeries originally performed by other doctors, for patients who come to us from all over the world.

I am also known for my work with facial fillers, in areas such as the cheeks, jawline, lips, chin, forehead, as well as both the upper and lower eyelids. I also help patients with reapplication of fillers they originally had done elsewhere, by dissolving their original filler and starting from scratch, and in some patients who had semi-permanent fillers, surgically removing them before applying a filler with fewer risks.

Dermal fillers are effective for slight cases of under eye bags, as well as under eye hollowing. Filler is placed in the tear trough below the eye bags to blend with the forward projection, making the eye bags look less puffy. This works well with eye bags that are not too prominent as the filler can create a more consistent contour under the eyes, and camouflage the bags. However, if the eye bags are too prominent, and filler is added to blend them, too much volume from the filler can exceed a natural-looking contour of the under eye area, so the under-eye area looks puffier than before the filler was placed. 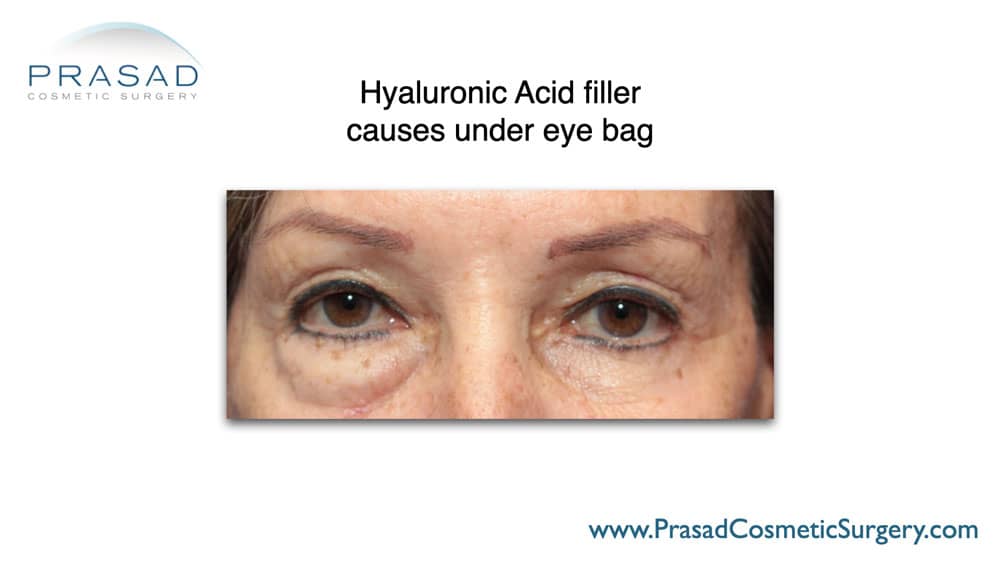 An experienced eyelid surgeon who also performs under-eye fillers knows where to draw the line between using filler to camouflage slight eye bags, and when surgery is needed to reduce and sculpt the fat that causes more prominent eye bags. Unfortunately, if a doctor, nurse, or other practitioner who cannot perform surgery in cases of larger eye bags, they may insist on using filler to treat this area themselves, rather than referring their patient to a surgeon.

How to Dissolve Under Eye Filler

When someone is dissatisfied with hyaluronic acid fillers done elsewhere, I often use hyaluronidase to dissolve the filler and determine what is the true anatomy. Once I see the true facial anatomy, I make recommendations regarding placement of filler, surgical correction, or a combination of the two.

There are times when someone had filler placed under the eyes several years prior and expected the filler to disappear. Oftentimes, these patients look swollen and feel like they don’t look like themselves. Generally, fillers placed in this area are metabolized over 4 to 12 months. If the filler is still present after 12 months, this may be due to encapsulation. Encapsulation is when the body forms a barrier around the filler, which prevents it from being metabolized naturally. In situations like this, the enzyme hyaluronidase can be placed in the right tissue levels to dissolve the filler. 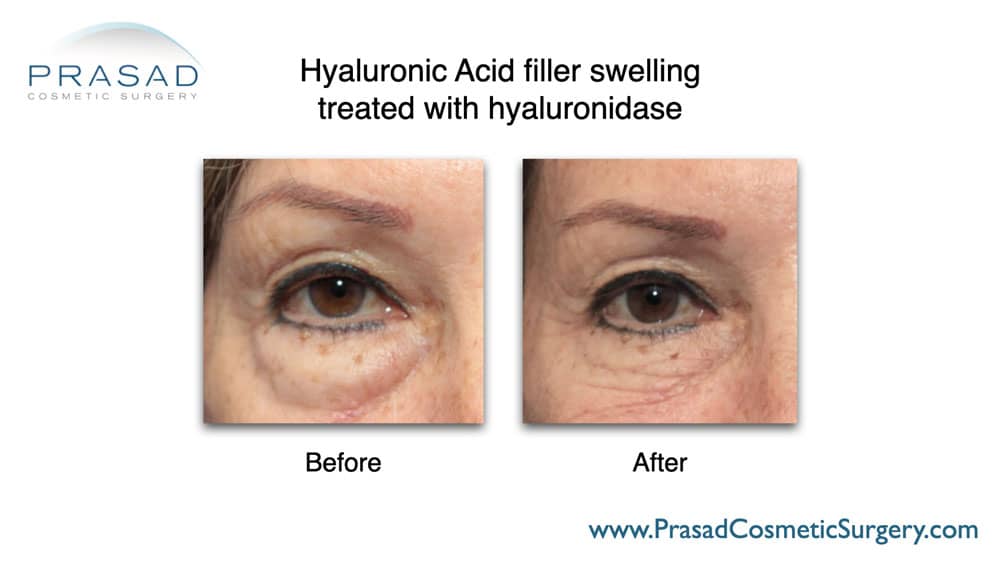 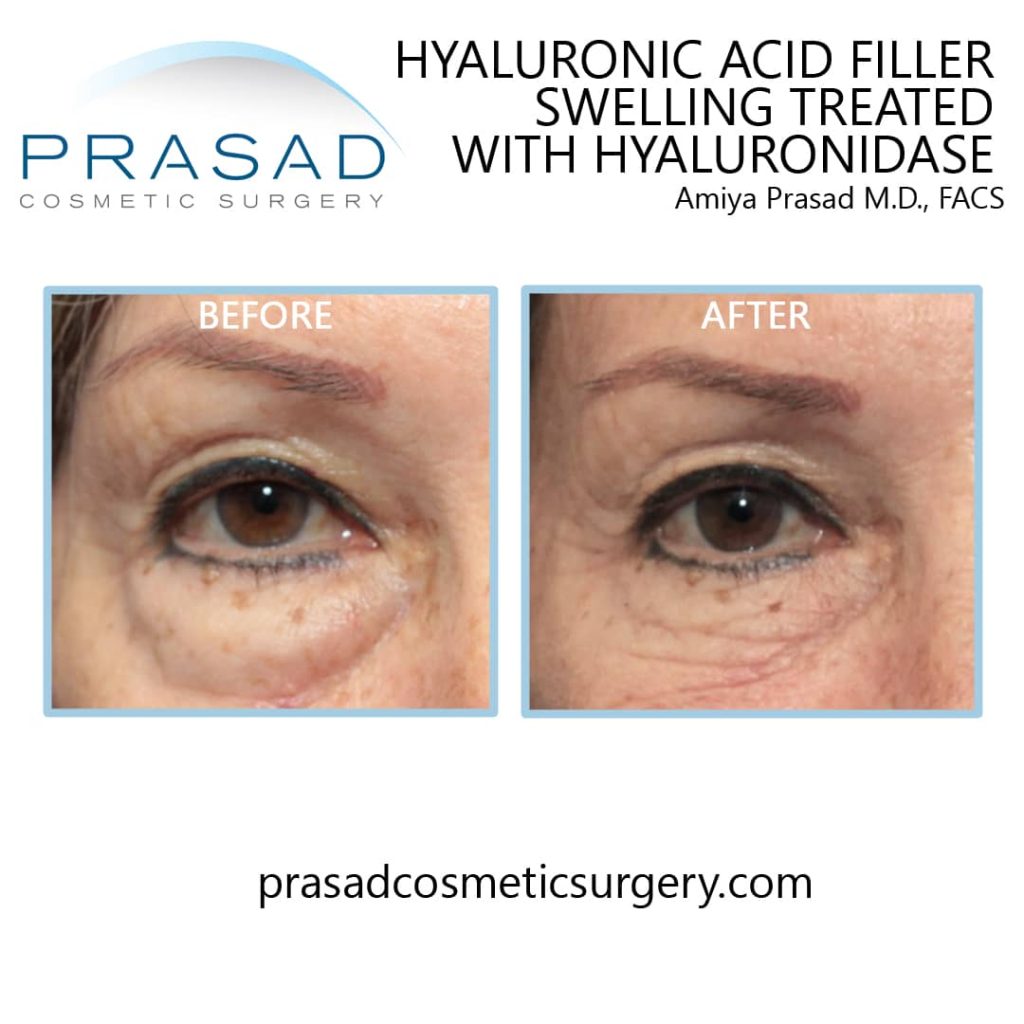 How Quickly Does Hyaluronidase Work?

Results from hyaluronidase can often be seen immediately, however, some fluid and swelling can take time to diminish. Many times, I’ve seen patients whose doctors attempted to dissolve their filler several times without success. This is where surgical experience with deeper anatomy allows me to place hyaluronidase more precisely to reveal the patient’s true anatomy. I usually tell my patients to come back after a week or two to assess if any residual filler may be present, and if additional dissolution is needed. My patients routinely go back to work the same day or the next day. 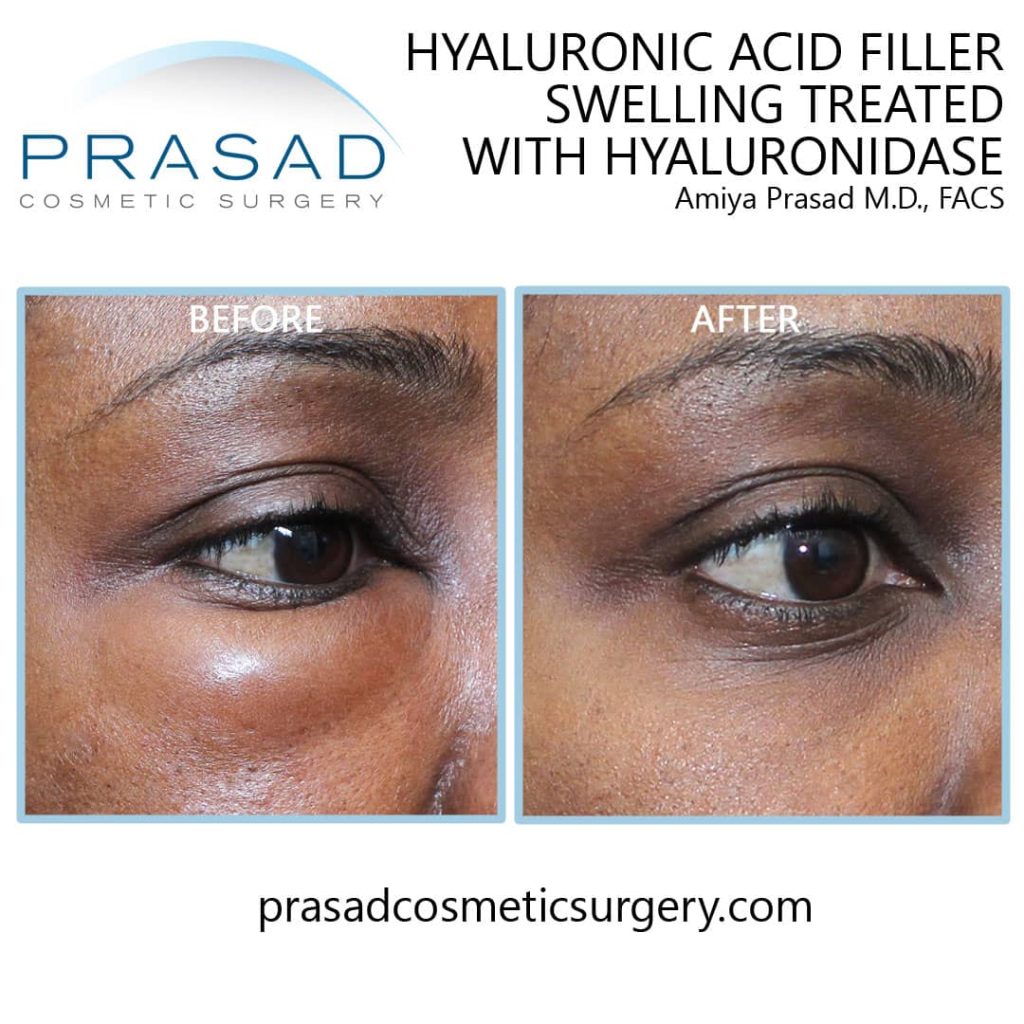 What If dissolving the filler reveals prominent under eye bags, with surgery being the appropriate solution? I have developed a strategy to perform surgery in a way that provides my patients with a natural appearance, with quicker recovery, and minimal downtime, which comes down to surgical technique, medical staff coordination, type of anesthesia, and aftercare. In my practice, I routinely perform under eye bag surgery in my state-of-the art operating facilities with local anesthesia with LITE IV sedation. I perform a procedure called transconjunctival blepharoplasty, which allows me to address the fat pockets from the inside of the eyelid, which though technically more complex, is less traumatic and disruptive to the eye anatomy, so it preserves the true shape that most people want to maintain.

Essentially, my patients can go back to work in 1 week with minimal swelling or bruising. Many patients who’ve come to us to address their dissatisfaction with fillers have recounted how they had swelling and bruising for weeks after filler placement. They are often impressed with how my performing surgery resulted in less swelling and bruising than when they had filler injections. 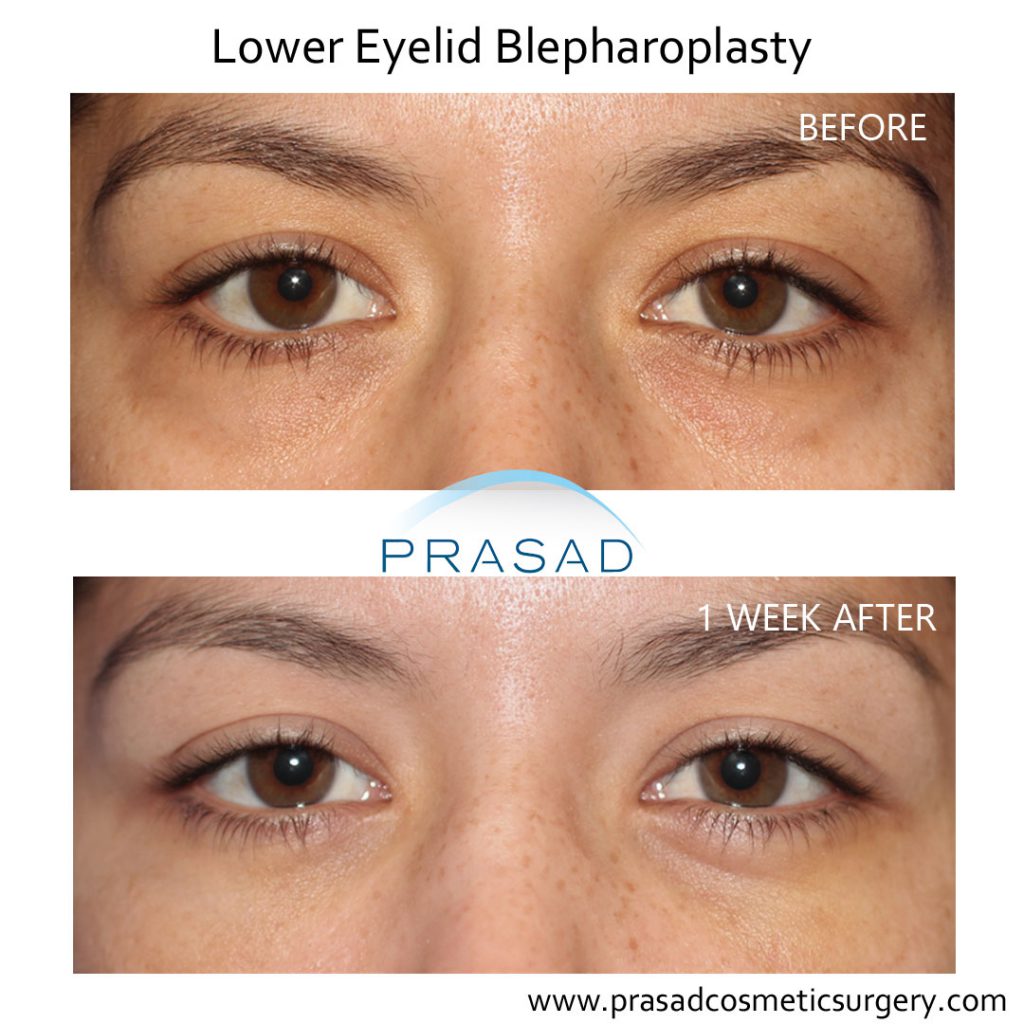 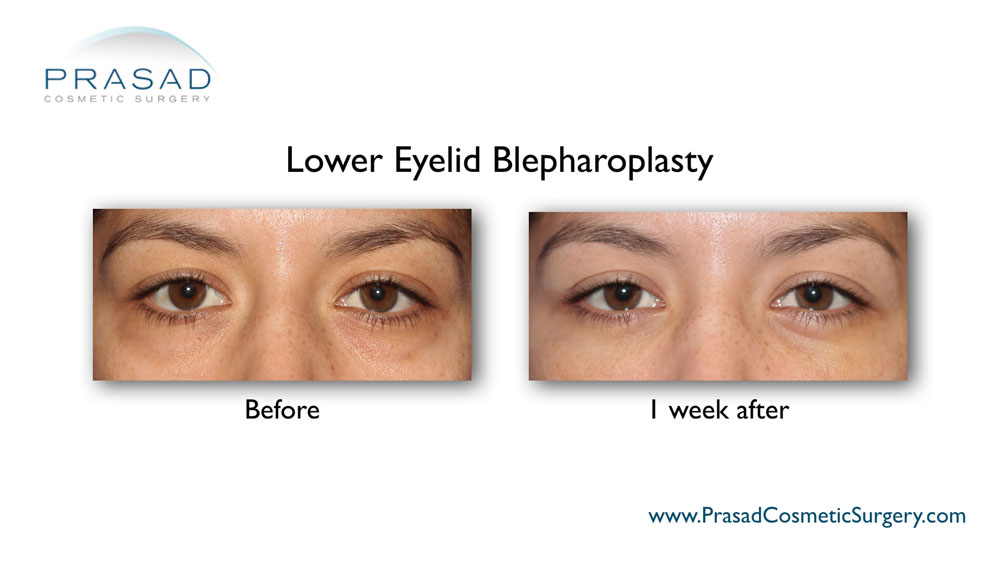 Many times, patients who come in for removal of filler, are doing so because they have an important event coming up. Whether I place filler or perform surgery, I would recommend at least 2 weeks of lead time to allow for settling and stability.

What is the Best Solution for Under Eye Problems?

The growing popularity of non-invasive procedures creates a perception that these solutions are just as good as surgery. While this is not true, non-surgical procedures do have a place. As a surgeon, I’ve integrated many minimally invasive procedures in my practice including injectables, microneedling, lasers, and radiofrequency technology to provide my patients with comprehensive strategies and solutions, particularly in areas where surgery is not enough for a patient’s needs. It’s important to recognize that any procedure where the skin is being medically altered or a needle is being placed through the skin is an invasive procedure. I routinely place fillers for patients who have minimal fat prolapse with under eye hollowing. I also will not perform injectables when surgery is the more appropriate solution. Your option if under eye filler makes your eyes look worse is to first dissolve the filler to restore your pre-filler anatomy. Once that is done, you can determine what is appropriate in your situation now knowing that both injectable placement, and surgery can have comparable risk, and recovery.